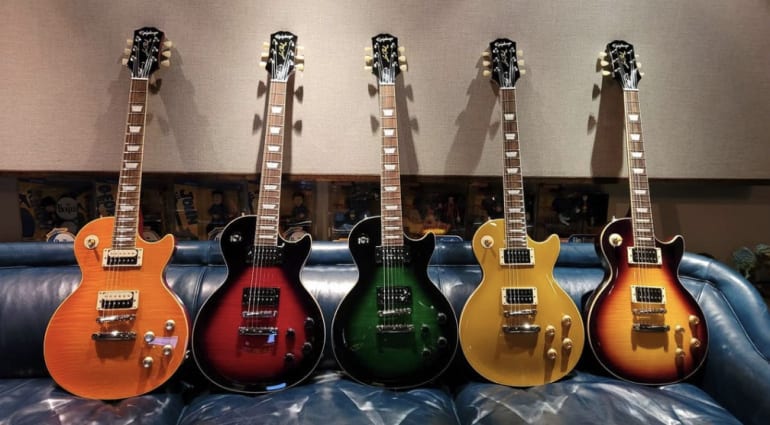 Gibson has ‘officially’ confirmed the Epiphone Slash Collection, plus a host of new signature models for the coming weeks. We have already seen the new Gibson Adam Jones USA Les Paul Standard model being teased in the last few days. But now there are even more signature models imminent.

“Our new Epiphone Slash Collection brings our collaboration with Slash to the next level, expanding the offering of the iconic Slash models to Epiphone with an accessible price point,”

“Slash was intimately involved in every aspect of the development of his new Epiphone Collection, and we are all excited to see his fans around the world rock out with them!”  –Cesar Gueikian, Gibson Brand President.

Gibson has also teased more signature model guitars, such as the new Jerry Cantrell “Wino” Les Paul. It’s uncertain if this is the guitar Cantrell shared on his Instagram account, or if it’s an as-of-yet unannounced acoustic model. Speculation on The Gear Page is that it may be a signature Hummingbird model.

We will keep you updated over the coming weeks and share any more official information that Gibson releases during Summer NAMM 2021 over the next few days.

Let us know what you think of all these new signature models due this year in the comments section below.

More Information on Gibson and Epiphone

4 responses to “Gibson confirms the Epiphone Slash Collection and more”