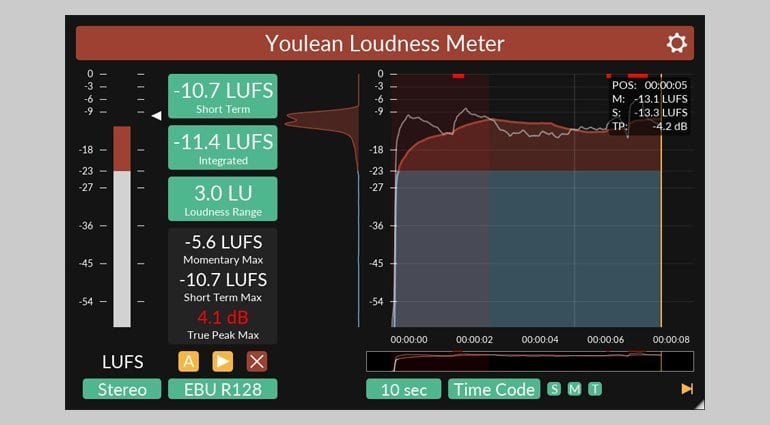 Understanding how loud your content is has never been more important. With laws being enforced (and adhered to!) and modern distribution channels working to more consistent specifications, you need to watch your levels. Keeping an eye on the output of your material and aiming to work within a given tolerance also enables you to deliver consistent and professional results. The key to all this is to have a good ‘Loudness Meter’, which is exactly what one-man software developer Youlean have called its new plug.

For those who have already parted with a few hundred pounds, or those who are considering purchasing a certain loudness meter plug-in from an industry leader in this field, you might spot some similarities. Yes, that’s right, even Youlean has admitted to being directly influenced by Nugen’s VisLM – and it shows. Considering VisLM costs 342 GBP with taxes included, this certainly makes ‘Loudness Meter’ worth trying. Obviously, we can’t make any promises that this plug-in will deliver accurate results and I haven’t yet made any comparisons to see how the values compare. However, the measuring algorithms for most of the international standards are published publicly anyway. Long gone are the days of differing RMS values, which Youlean quite wisely didn’t even include here.

Clearly Nugen’s plug-in has a much nicer GUI, but if it’s just the numbers you’re after, then why not save some pennies? We might even see a new ‘skin’ released for Youlean’s Loudness Meter. Nugen also released another loundess metering plug-in this year, which I covered here. MasterCheck Pro doesn’t have as much visual feedback but does offer some nice guidance when trying to reach a certain loudness. Much earlier this year we saw TBProAudio update their free metering plug-in to version 2. dpMeterII is a fantastic free plug-in, which again might not look the most striking, but I have compared it’s results with my copy of iZotope’s Insight and the numbers are reassuringly similar. Happy metering everyone!

If you think ‘Loudness Meter’ is for you (and, after all, it’s free), download the installer from the KVR Developer Challenge page. The plug-in will run on 64 bit Macintosh and Windows systems, but currently only in VST and AU formats.

Youlean has produced this short video providing a basic insight into this plug-in. Published on his YouTube channel, it may only be a screen capture of himself exploring the plug-in, but it covers the Loudness Meter feature set quite well.