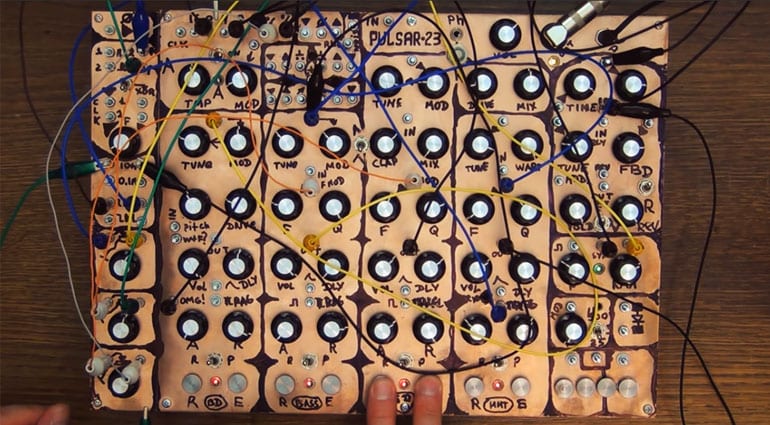 Vlad Kreimer has brought us a lot of crazy stuff through Soma Laboratories, most of which defy explanation in the most delicious sense. He’s now released some information and a video demo of the prototype Pulsar-23 which appears to be the most exciting and wonderfully weird drum machine I’ve ever witnessed.

This is what a prototype is supposed to look like – all hand-written labels and crocodile clips. It’s an intriguing mess that somehow seems to pump out the most amazing rhythms and textures. And yet it doesn’t have a sequencer – that’s just not normal. Instead, the Pulsar-23 gives birth to patterns within itself. It’s an organic, dynamic, rhythm generating, semi-modular groove machine.

This isn’t making a lot of sense so let’s get hold of some facts. The entire box is made up of 23 independent modules. The organismic architecture means that everything is wired into everything else and so sound generation is often based upon deciding what crashes it what, and by how much.

There are 4 drum channels – Kick, Kick/Percussion, Share and Hi-Hat/Cymbal. It’s all analogue synthesis, no samples or digital jiggery-pokery (except for the effects chip). Each channel has its own envelope which has the ability to sustain the sounds into drones and noise synthesizers. There are 4 independent loop recorders which can be individually clocked – that’s where the rhythm starts to emerge from. The Clock generator then provides an array of dividers to get things moving. A wide-ranging LFO with variable waveforms looks after modulation. And then there’s “Shaos” a pseudo-random generator based on shift registers with 4 independent outputs, sample and hold and all sorts.

To round it off there are 2 CV controlled gates, 2 VCAs and 2 invertors. An effects DSP chip also offers CV control over sample rate and a Distortion circuit. There are 3 assignable attenuators and 2 dynamic CV sensors for CV generation. In total there are 52 knobs, 11 switches and over 100 patch points. It even has some nodes revealed on the front panel for circuit bending. Oh, and there’s MIDI control and synchronisation. 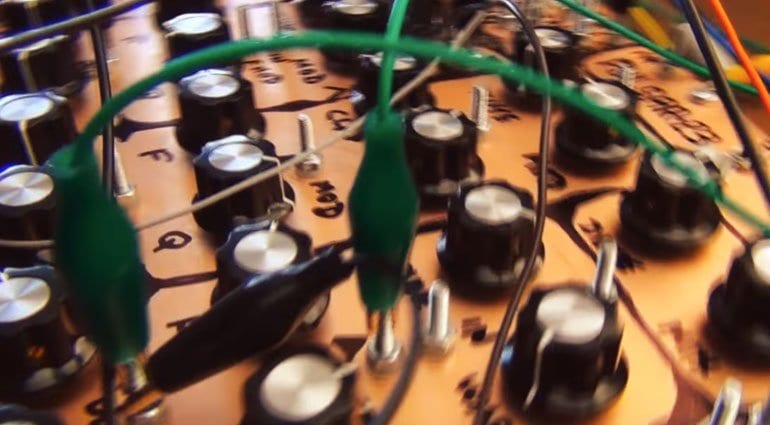 So, it makes beats then yeah?

The sounds coming out of this thing are immense. I saw the video first on my phone, but that doesn’t do it justice. Run it through some proper speakers and this thing thumps at you. The idea is that you “synthesis rhythms as sound” so there’s no need for step sequencing. In the video there’s a lot of tapping of silver buttons to trigger sounds and a lot of knob twiddling. I get the impression that it’s not the sort of thing you set running and then forget about – it’s going to pull you into to play and modulate.

There are three modes of operation: standalone, MIDI sync and control, and Eurorack integration. But you can use all three at the same time. Just wire it into whatever you have and make it happen. Each channel has a dry output so you can route out for external processing. The “organismic” business is taken from the Lyra-8 where everything can modulate, modify and interact with everything else. “It’s a complex non-linear dynamic structure similar to a living organism.” And you have control over how far that goes, from classic drum machine to madness.

But the sounds, my god, the sounds. There’s far more than drums and percussion going on here. There are basslines and screeches, noises, clangs and drones, acid and banging, subtle and monstrous. You can keep your 808 and your rhythm computers the Pulsar-23 is like plummeting into the beating heart of a planet.

Vlad says that he’s “done the development of the main sound design and circuitry, and now I would like to introduce the project to the world. The most important things – the sound, the structure, the philosophy – are done.” The plan to release by the end of the year for the chunky price of €1200-€1500. That’s a lot! But then this is quite a machine. You can pre-order if you want to, just send them an email at somasynths@gmail.com – you know you want to.