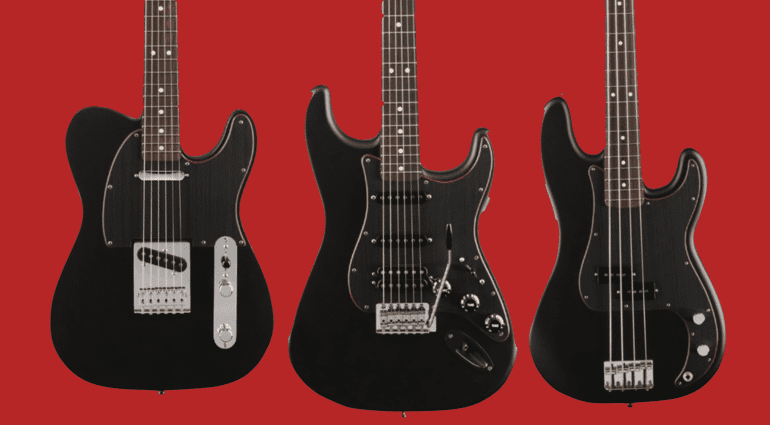 Fender have added the Noir Series to their current line-up, consisting of a triumvirate of satin black models: a Stratocaster, Telecaster and a Precision Bass, all made in Mexico.

The three models are all finished in a ‘Special Edition’ satin black. Not exactly groundbreaking stuff here, but if you want a plain black instrument and don’t want it shiny, then you are in luck!

They are all polyurethane satin black finishes with matching headstocks, so it really is a range of ‘none more black’ guitars. To me, it all smacks a little of a marketing ploy as there doesn’t appear to be anything truly unique about any of them.

Oh wait, you get a black pickguard with a red edge. My bad, that is really worth the Special Edition status… Oh dear.

Modern C maple necks, rosewood fretboard and alder bodies are available all round. But again, we’ve seen it all before. I have to say it’s the most boring release I have seen from Fender in a while. It smacks of a desperate ploy to shift some mid-priced guitars based on the lack of choice, with all three being offered in satin black with chrome hardware. Yawn…

Well, at least they are relatively cheap for a Mexican made guitar. Because they are black, they will go with any outfit. Or if you play in a Goth Emo power pop trio then you’ll probably be over the moon with all three of these. To me, they just look like a tired 1980s guitar design, as I’m pretty sure black with a hint of red was the en vogue back then.

The Fender Noir limited run are all due out in May.