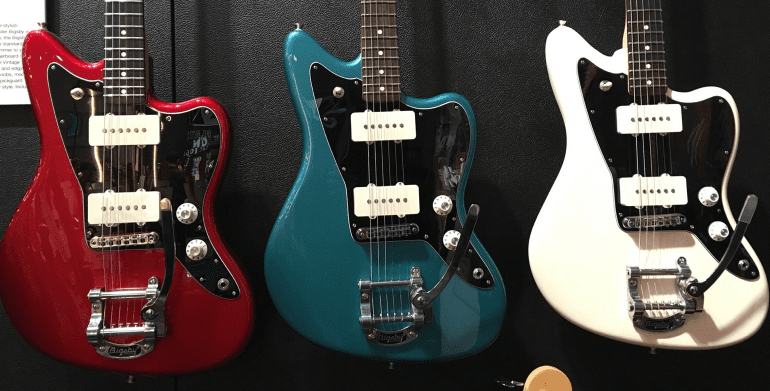 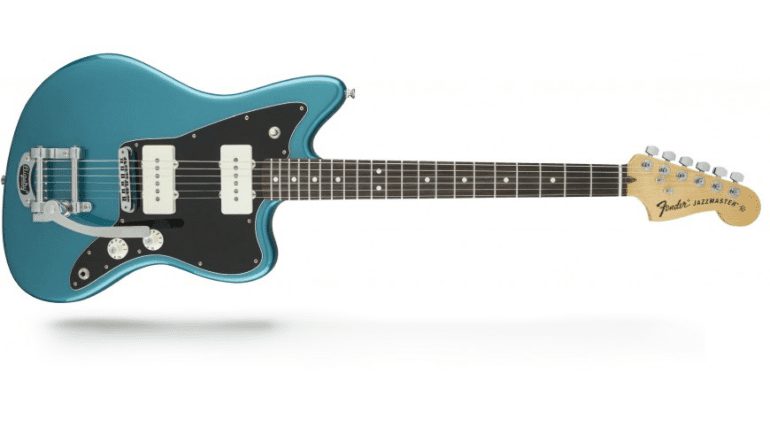 Fender have announced the Limited Edition American Special Jazzmaster. The model has stripped back controls and a Bigsby B50 licensed trem instead of the traditional Jazzmaster trem. They have also substituted the traditional floating bridge for a TOM Tuneomatic style fixed one.

This edition of the classic Jazzmaster has a modern 9.5” fingerboard radius and are loaded with Fender’s Pure Vintage ’65 Jazzmaster pickups. The look is finished off with modern Fender tuners, a black/white/black pickguard and white ‘Witch Hat’ control knobs. So, it’s a bit of a mismatch of different eras and styles for a Jazzmaster. The guitar comes in either Ocean Turquoise, Candy Apple Red and Olympic White. Each guitar also features an obligatory ‘limited edition’ Fender neck plate.

I think Fender may well be trying to compete with some of the ‘boutique’ guitar builders that have themselves been influenced by Fender. This may be why they have chosen a Bigsby B50 and a more streamlined control layout, a bit like a Fano JM6 perhaps… The jury is out for me on whether or not I like the new version’s looks. However I have a set of those ’65 Jazzmaster pickups in one of my Fender Jazzmasters that I currently own and I will say they are really quite something.

No audio demos as yet of the new guitar, but if I find one I will be sure to share it. Plus I can only find them for sale on a few sites in Europe as yet and so prices in Euros…