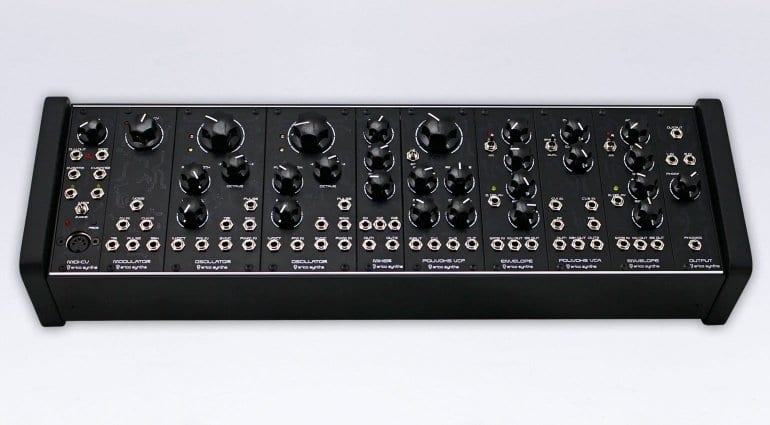 Erica Synths love of the Soviet-era Polivoks synthesizer has inspired a new range of DIY modules that can be built into an entire system. In fact, they’ll give you all the modules, the 84hp case, power supply and patch cables for a cool €1000. Time to get your soldering iron out.

Erica Synths stress that this is not an attempt to clone the Polivoks. Instead, the modularity and the 53 patch points mean that this goes much, much further. The system comprises 8 Eurorack-style modules which can all be purchased separately and integrated into any system, if you so desire. There’s a MIDI-to-CV converter, LFO modulator, Polivoks VCO, VCF, Envelope and VCA, a mixer and an output module.

When it’s all put together, it forms a neat and very black synth. Although, as with all complete systems, you lose that aesthetic of jumbled modules that I, personally, really like.

The modules are available separately or in various combinations, with or without front panels. There’s a 72hp bundle that comes with two VCO’s, the LFO, mixer, VCF, two envelopes and a VCA. That’s 8 modules for only €550 – that’s amazing value. The full 84hp bundle adds the MIDI-CV and output module for €750. The case, power supply and patch cables brings us up to the €1000. I’d really like to see some images of the kits just to get a vague idea of what you would be taking on.

Check out the video below for how good this looks and sounds. This would be an awesome way of starting in the world of modular, it’s a complete, comprehensive and affordable system. Or why not bring some Polivoks darkness to your existing setup. They really could have done with giving it a decent name “A Polivoks inspired DIY Modular System” is not exactly catchy.