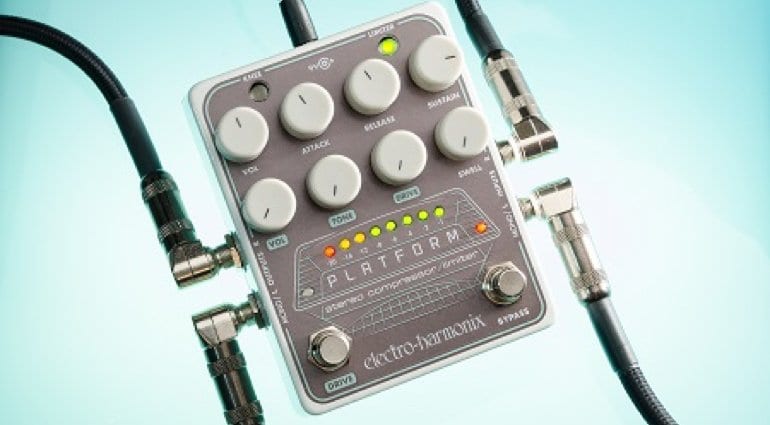 Despite having only recently launched the Tone Corset analogue compressor pedal, Electro Harmonix evidently think there’s room in the pedal market for yet another compression unit. Its second offering in as many weeks is called the Platform Stereo Compressor. This one includes limiting and drive circuits, so could be useful for both live and studio environments.

The new stereo compression pedal seems to offer a lot in terms of features. Amongst its arsenal of knobs Volume, Attack, Release, Sustain, Drive and Swell (when turned clockwise swell increases from zero and notes fade in more gradually).  You also get push buttons for Hard or Soft Knee and the Limiter. The Drive section can be switched in via its own dedicated footswitch and has the usual Volume, Tone and Drive controls.

A  three-colour, eight LED meter gives you an easy to see gain reduction readout and so you can see what is going on when playing live. It is always handy to have metering when using compression, and this one looks decent enough for the size of the pedal.

You can run the Platform in mono in/out mode, or mono in/stereo out and finally in stereo in/stereo out. That means it can handle a lot of different scenarios, and could be handy for more complex rigs. The Platform pedal is buffered bypass, well-suited to long cable runs.

It does need its own dedicated EHX9.6-200mA power supply and this is included in the price of the unit. The Platform should be available the second week of July. On paper, this sounds like a well thouht-out design and the official demo video below gives a few good examples of the Platform in action. 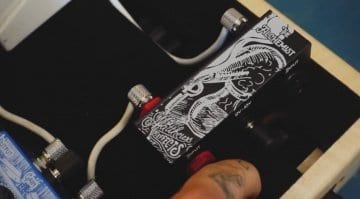