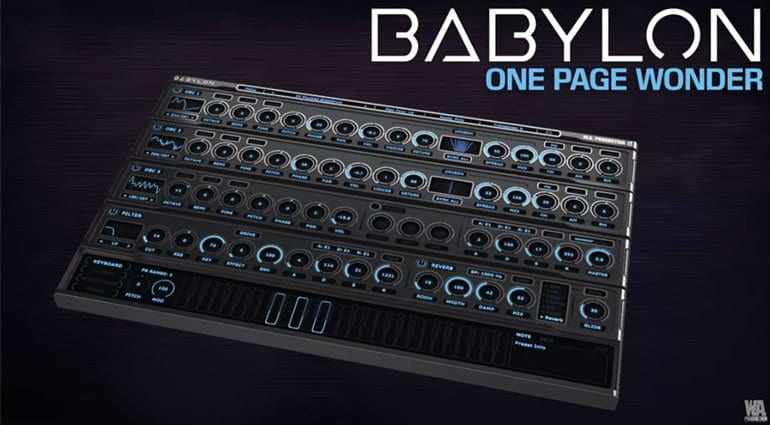 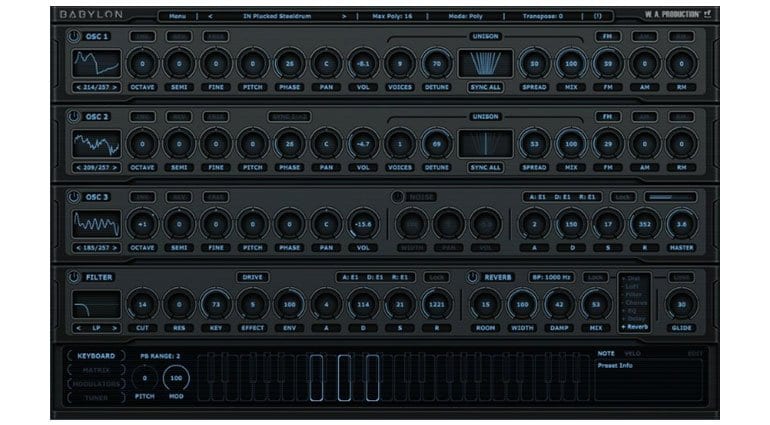 W.A. Production has released (I think) the Babylon Synthesizer virtual instrument whose key feature is that it only has a single page for editing. I say “I think” because there’s nothing about it on their website although according to the blurb on Plugin Boutique “W.A. Production have been wanting to create a synth like Babylon for years”. The promotional video is also unlisted which seems odd. But let’s not let these things distract us from the “One Page Wonder” that is Babylon.

So they’ve squished everything onto a single page – awesome. But you probably won’t spend much time editing and tweaking as it has 2300 presets to browse through. If you do want to venture into designing your own patches then each of the three oscillators can run one of 257 waveforms with Osc 1&2 acting as sound sources and Osc 3 as modulation (although Osc 3 can be a sound source as well). You have control over pitch, tuning, phase and panning as well as dictating how many unison voices they have and amount of spread and detuning. There are sources for FM, AM and RM modulations which utilises oscillator 3 and an ADSR envelope with 12 different curve types. There’s also a noise generator.

On the filter side it has lots of different modes to try and the same curves as the envelope. It also includes different sorts of saturation, crush and distortion elements which is quite nice.

At the end of the chain is a stack of 7 effects that you can enable in any order. The effect section can be locked while you browse the presets, as can the envelope, which a thoughtful feature.

At the bottom of the single page is a section that ruins the whole “One Page Wonder” thing by switching between Keyboard, Matrix, Modulation and Tuning. This is where you can route your LFO including a dedicated vibrato or set up some really detailed microtuning.

Having to switch to another page or editing section is nothing to be ashamed of and doesn’t have to be complicated. Babylon does give you a reasonably clear front end where some pretty advanced synthesis is possible. But you’re more likely to surf the presets and tweak them to your liking and for that there’s probably too much on the screen. But finding that balance between simplicity and the demands of synthesis is very difficult. If you’re looking for a shed load of synth sounds to drop into your projects then for the current price of £9.95 on Plugin Boutique you can’t go far wrong.