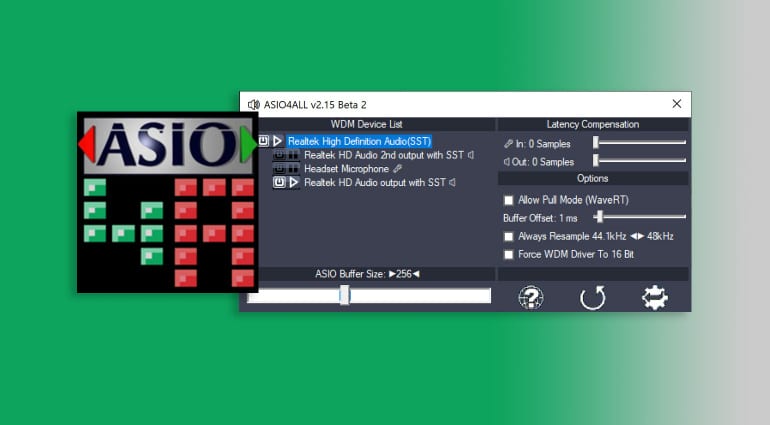 In the first major update since Windows 10 support was added in 2015, Michael Tippach has released a new version of ASIO4ALL. While the changes are not huge it’s got it where it counts and as a regular ASIO4ALL user this update has made my day.

ASIO4ALL is one of the most useful music technology utilities for Windows-based music makers. It takes the built-in multimedia audio engine of laptops and desktops and transforms it into a low-latency music production system that will run as an ASIO driver in professional music software. Michael wrote the driver in 2003 in order to get his laptop AC97 audio to run within ASIO based software.

The reality of the in-built audio on Windows computers is that they are designed for movie playback, games and music and to ensure smooth playback across the thousands of PC variations it works within a large buffer. This buffer results in a ridiculous amount of latency when trying to run real-time audio software. While most music software supports the Windows audio drivers the latency makes monitoring impossible and virtual instruments unplayable. ASIO4ALL sorts all of that out by wrapping the Windows driver in an ASIO4ALL driver and neatly bypasses the buffer. The result is that your laptop or desktop becomes capable of being a playable and workable music-making machine.

Alternatively, of course, you should buy a USB audio interface that has proper ASIO drivers. But this is not about that, this is about dealing with and enabled the audio system that comes with the computer.

ASIO4ALL is not perfect. In some ways, it’s a hack to work around the limitations of other people’s drivers. It’s not always stable, the interface can be a bit baffling and you can only go so far with the latency. However, it’s completely enabled computers to become studios in the bedrooms of many a penniless musician.

What’s important about the new version for me is the better support for Intel SST (Smart Sound Technology) drivers. It’s the audio system found in most modern laptops and hybrids like the Microsoft Surface Pro. I’ve spent a lot of time dealing with the Surface Pro and music production and getting your head around the settings within the previous version of ASIO4ALL was challenging to say the least. There’s a lot of trial and error and blue screens to contend with while trying to get the right combination of settings to get low latency audio in and out of the machine.

The new version is a dream in comparison. Rather than having to contend with various sample rates, different options and multiple entries for the same thing there’s just one option – and it works. 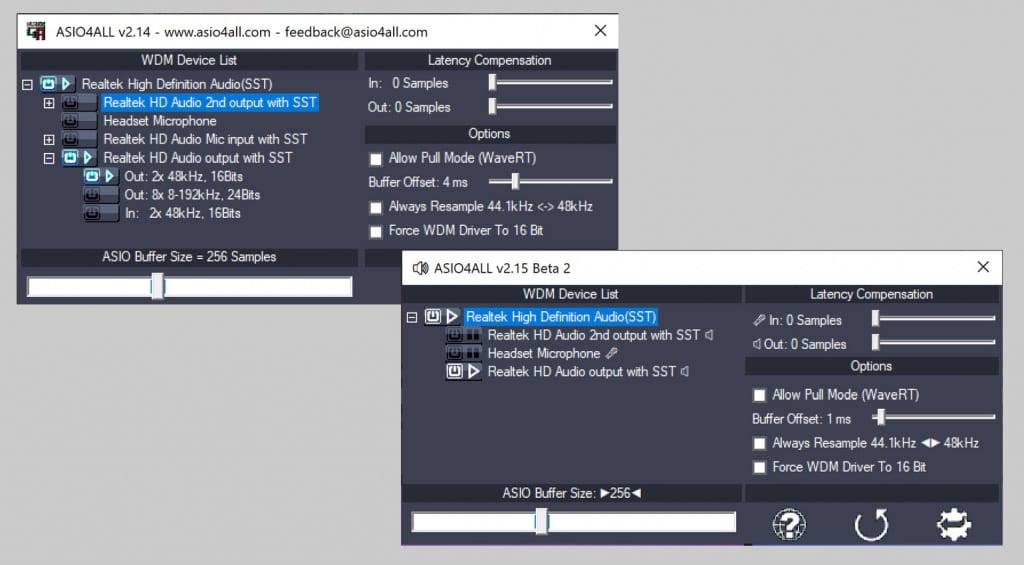 My Surface Pro has two audio drivers, one for the speakers and one for the headphones. The previous version of ASIO4ALL would not let you run both at the same time without crackles and distortion and so you could only enable one. If you then plugged in some headphones you’d have to go back into the control panel and activate/deactivate the relevant drivers. Now you can select both drivers and see them as 4 channels in your music software. I can’t quite express how fantastic that is!

The look is slightly different, it now supports higher resolution screens and it’s all a bit tidier. But otherwise, it all seems very familiar. There are loads of other bug fixes, rewrites and improvements that you can read about on the website.

The audio stack in Windows has been greatly improved since 2003 with the WASAPI protocol and is now capable of realtime audio latency with the right combination of software and hardware. However, I’ve found repeatedly that ASIO4ALL beats the latency and performance of Windows Audio in almost all applications. Microsoft continues to work at it and a new API called AudioGraph has the potential to move things along in terms of Windows 10 native audio systems. So maybe the days of ASIO4ALL are numbered but I wouldn’t hold your breath.

ASIO4ALL is a free download from Michael’s revamped and advertising heavy website. ASIO4ALL has always been free to use and has helped so many people over the past decades that I certainly don’t resent him making a few dollars from adverts. Michael, thank you for the work you’ve done and how you’ve enabled so many musicians over the years.