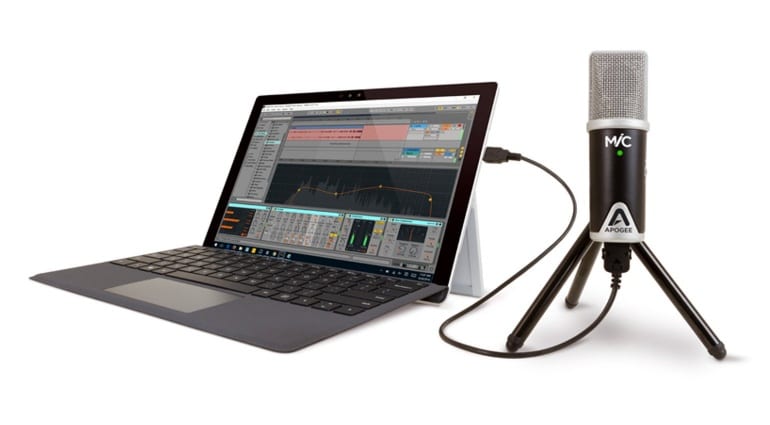 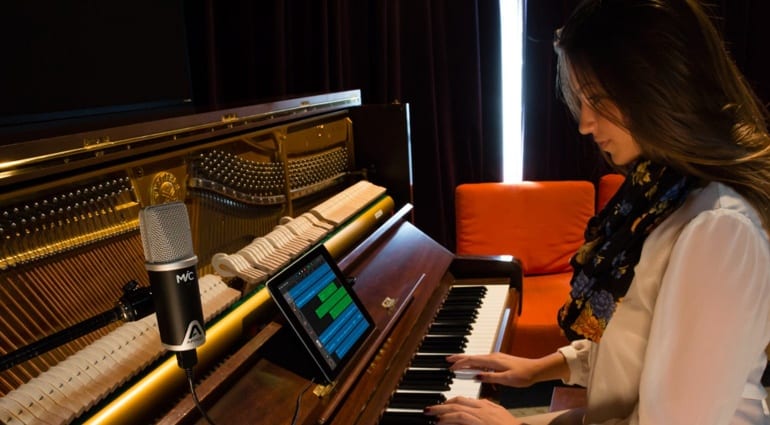 Although the Apogee PR department are implying that this the release of a new product, all that’s happened is that Windows “support” is being added to the existing MiC 96k. Why the quotation marks around the word support? Read on…

The MiC 96k has been around since 2011, and has been well received. It’s a USB mic that plugs directly into your computer. With the Apogee badge on the front, I’d assume that the quality is very good. The website quotes no data on dynamic range or frequency range captured by the diaphragm, though. The preamp is described by Apogee as “studio quality”, an epithet a lot of makers use these days.

They are also touting their PUREdigital technology, which uses “special high quality circuitry that preserves the true tone of the sound source”. It also comes with a desk tripod but, unlike the cheaper Rode NT USB, no pop shield. The whole casing is made of metal, so it should feel solid. It has a multi-colour LED which shows you if audio signal is present (bright green), if the signal is near clipping (orange) or if it’s overloading the preamp (red). That’s a handy little feature; a quick glance at the mic itself will tell you if the level is OK without you having to consult the metering in your DAW.

The price of USD 199 is, of course, on the expensive side for this type of product, with Thomann listing its budget t-bone USB mics at EUR 58. While the Rode NT USB is priced considerably lower at EUR 149, its interface “only” manages 16-bit/48kHz, which is of course is fine for many applications, especially podcasting. But the cheaper Rode NT USB has a headphone output, which the MiC 96k lacks. This means you will be monitoring over your laptop’s headphone output, which in Windows is a separate audio device to any USB interface. Apogee support assure me that this is made possible by creating a composite device in the ASIO driver, or “aggregate device” in Pro Tools. Mac users, of course, have a hassle-free Core Audio implementation where all this is no problem.

So what’s actually new here? The MiC 96k has been around since 2011, and featured compatibility with iOS devices and, using USB, with Macs. Now Apogee say they are “pleased to announce MiC 96k for Windows and Mac”, and a graphic next to the “new” product has a Windows logo shows the MiC 96k plugged into what looks like a Microsoft Surface.

So this is the same hardware, using the same components. Have they written a new dedicated Windows driver for professional audio applications? No. The driver for DAWs on Windows is the ASIO4ALL driver, a non-profit third-party driver. So Apogee haven’t even bothered to write a Windows ASIO driver at all. I’m guessing that this means they have a new WDM driver of some sort, but nothing I could see on their website backs up that supposition. It’s all pretty thin given that they are announcing this as some kind of new release, which it plainly isn’t.

OK, this is no doubt a quality device that’s well-built and worthy of the Apogee name, and has a couple of handy features. It’s the marketing hype that bothers me, created around a Windows implementation that, to me at least, doesn’t seem based on anything the company have done themselves. If someone knows anything to the contrary, please let us know via the comments section below.

For more information, head over to the Apogee website.