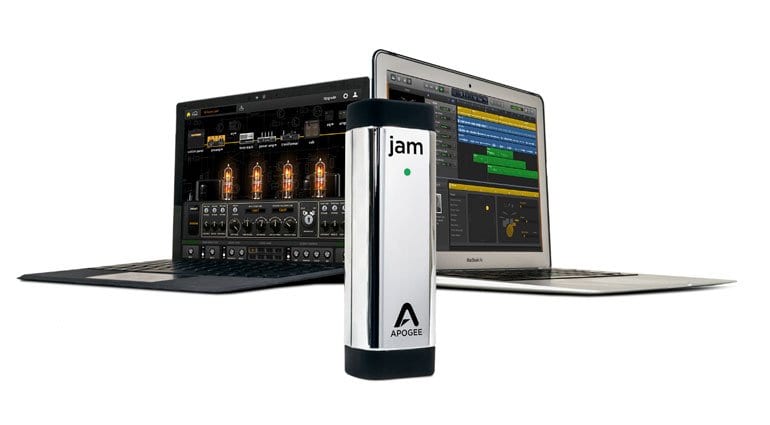 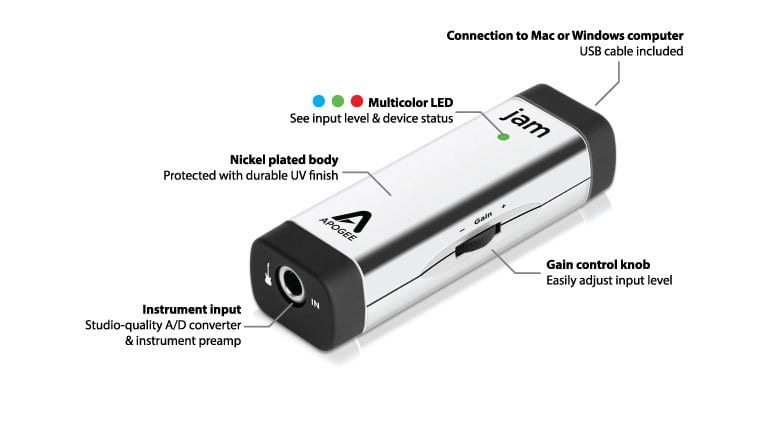 It’s a very simple guitar interface for your iPad, Apple Mac or Windows computer. It has all the “legendary” sound quality, warmth and richness of Apogee technology. It’s pocket sized, it plugs in via USB and lets you plug your guitar into the other end. It’s powered by USB, has a gain wheel on the side and can record up to 24bit 96kHz. Awesome simplicity. Although it’s designed for Hi-z guitar inputs it can also handle dynamic microphones and line level from a synthesizer as well. It’s a versatile little box.

It’s available in two versions, one for iOS which includes the all important Lightning cable, and one for MacOS and Windows. The iOS version is $129, the desktop version $99.

This is all cool and groovy until you get down to the nitty gritty of the Windows audio engine. On the Mac with their Core Audio system you can combine audio interfaces, inputs and outputs, with ease. The software addresses the Core Audio and goes to whatever interface or output you’ve specified. On Windows this doesn’t happen. For low latency you need to be using ASIO drivers and unfortunately you cannot mix and match audio interfaces under the same ASIO driver. The reason this is important is because the JAM 96k has no output. No line output, no headphone output and so they are relying on another audio engine for getting playback. On the Mac – no problem because of Core Audio. On Windows you are going to have to use a third party driver called ASIO4ALL. Now this is a remarkable utility that let’s you combine audio interfaces into one ASIO driver on Windows, but it’s not as good or efficient as using a proper ASIO driver for one audio interface.

So ultimately this interface is not particularly well suited for Windows use, which is a shame. You can use it, it will work, but there are better solutions out there that use proper ASIO drivers and have their own outputs as well as inputs.