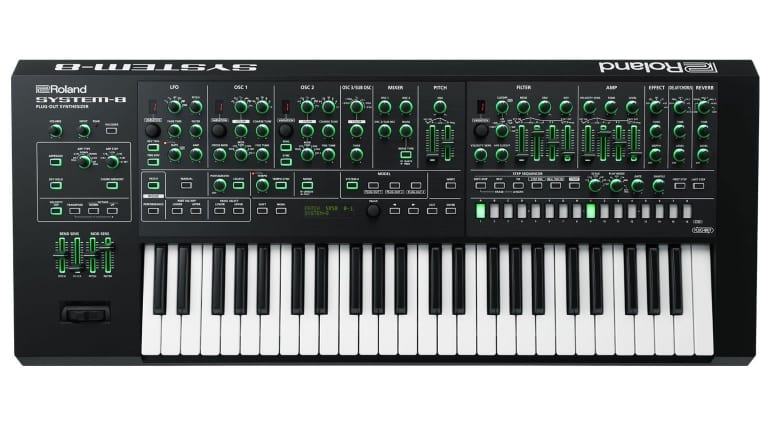 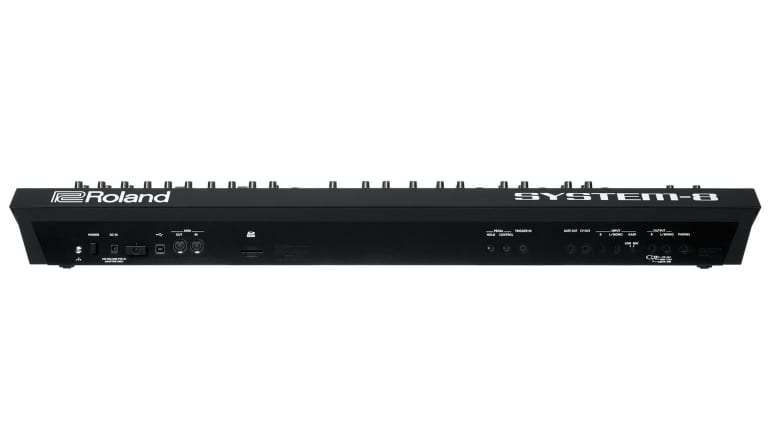 The Roland System-8 is by far the most interesting release of Roland’s 909 day. Well it is if you’re into synthesizers. It’s been rumoured and leaked aplenty and Sweetwaters YouTube demo that dropped last night has given us a taste of what this fella can do. But here are the full and official details from Roland.

It is of course built on their ACB – Analogue Circuit Behaviour – engine which models how analogue circuitry works without actually being analogue. This has worked beautifully in their AIRA range of synths and drum machines. You’d be hard pressed to find a difference between the model and the real thing. Roland really have been able to produce something with the sound and behaviour of analogue and all the advantages of digital technology. Not everyone’s pleased with that but we’re going to go with it.

The System-8 features 3 oscillators with 8 voices. There are high pass, low pass and side band filters. Dedicated controls for almost every parameter. It has a polyphonic step sequencer along with arpeggiator, vocoder and chord memory functions. On the back there’s CV/Gate outputs for integration with analogue and modular gear. It can host up to 3 Plug-Out synths which can completely transform the sound of the System-8. There’s a large effects section which is all highly tweakable. There’s 64 user patches and 64 performance presets that show off the possibilities and give you somewhere to store your own sound creations. All bound up in a 49 note, full size keyboard and the now familiar love it/hate it green AIRA lighting.

This was one of the coolest features of the System-1, the fact that you could load up an SH-101 with the Plug-Out feature. The System-8 triples that ability and opens it up to bigger Roland classics. The System-8 ships with the Jupiter-8 and a Juno-106 plug-out. These are authentic sonic reproductions of the actual synthesizers. It’s like they thrown in the Boutique range but with far more instant knob and slider control. It’s not quite all ready to go just yet unfortunately. The Jupiter-8 is ready but the Juno-106 won’t be along until 2017. The plug-outs previously available on the System-1, the SH-101, SH-2 and PROMARS will be “available soon”. But i think you’ll have plenty to be getting on with.

Did I mention that in “Performance Mode” you can combine a Plug-Out synth with the internal synth engine to create super patches? I’m liking that a lot.

The System-1 developed into a Eurorack version with more patch points that they called the System-1m. I wonder whether there are any plans to push the System-8 into that form factor? I really like how revealing the patch points on the System-1m opened up it’s potential to a larger analogue world and that would be an awesome thing for a polyphonic synth of this size.

At $1499 this is designed to be a serious piece of hardware and is perhaps more expensive that we have gotten used to lately. But considering what it is and what it can do I don’t think you can expect any other price point. Have Roland nailed it with this one? We’ll have to wait until we’ve all had a play to find out. Sadly there’s no news on availability at this time.

For all the information head over to the Roland System-8 product page.