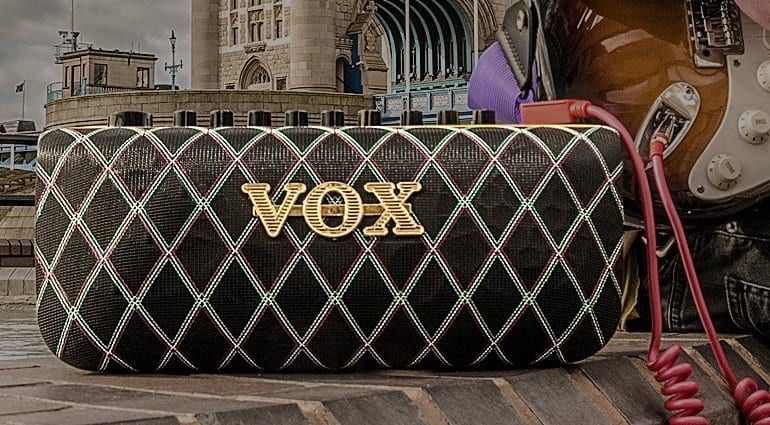 Two new releases in one week by Vox! Just as news reached us of the updated AC2 mini amp range, Vox announced its new Adio Air 50W desktop amp. While these new boxes have only have 3” speakers, they do offer Bluetooth and MIDI. Will these modern desktop amps be what players need? Are they flexible enough to make you want to go out an buy one?

The Vox GT and BS Adio Air desktop amps are the company’s brand new range of compact, yet feature-heavy modelling amps. They use VOx’s Virtual Element Technology, or VET for short, to generate their amp tones. The GT guitar model comes with 23 models, while the BS bass model has 17, though both also incorporate 19 built-in effects as well.

Their ‘modern’ looks make them look a bit like an iPod speaker dock. On the connectivity side, the Adio Air feature Bluetooth for wireless connectivity, which you can also use to transmit MIDI to the amp for controlling parameter changes in realtime. You can also record direct to your computer via an onboard USB output. There are, of course, also standard jack inputs and outputs as well.

The amps have a set of two 3″ speakers to deliver the 50W power, which seems small and could prove an issue. As I have yet to try one, I will reserve judgement. You can get great sounds from smaller speakers, such as the Blackstar Fly series of mini amps for example.

Eight AA batteries provide up to eight hours of practise time. This could be a bonus for many players, because it will make for an easy solution for many different scenarios. Being able to send audio to the amp via Bluetooth is also handy, as you’ll be able to easily send songs over from a smart phone letting you can jam along. That’s great for buskers or those of us that want to have a quick jam along in our living rooms.