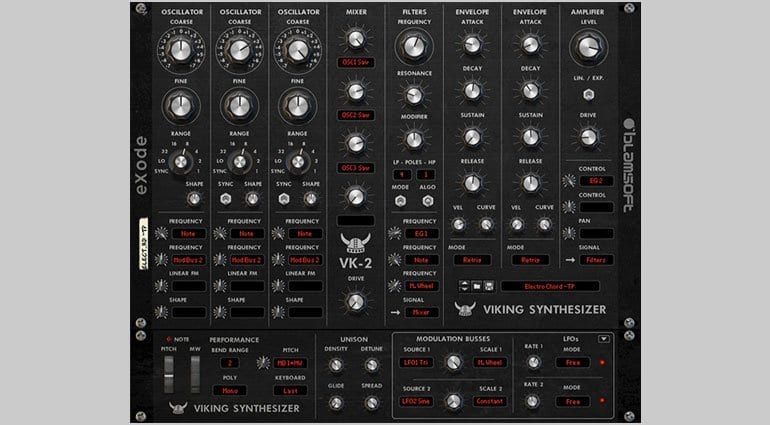 Blamsoft have released the VK-2 Viking Synthesizer for Reason. Taking the full advantage of the enhanced developers kit for Reason 9.2 it looks every bit like a serious synthesizer in a modular style.

Blamsoft say that “VK-2 brings you the power of a modular synthesizer, without the hassle of cables”. First of all, that’s a weird thing to say about a Reason Extension, because Reason has always been all about the cables. And second what they actually mean is that it’s a regular synthesizer. It’s hardwired to work, like Minimoog is or a Prophet 5 is or a DeepMind 12 is. The definition of modular is that it has separate modules that can be wired together in different configurations. If you’ve taken out the “hassle of cables” then you’ve taken out what makes modular, modular.

I’m being a bit pedantic, but this weird “hassle free” modular synthesizer is starting off on the wrong foot. The truth is that this is an exceptional software synthesizer. It’s a highly configurable, modulating monster of a virtual analogue synth. They should be celebrating this fact rather than confusing us all with this cableless modular nonsense. Or, alternatively, they should have gone the other way and stuck a load of patch sockets on the front. Reason has always frustrated me with its back panel of patch cabling. Once I’ve turned the rack around I lose the sense of what I’m trying to do. With hardware modular you have it all in front of you – that’s the beauty of it. I would love to see Reason start to pull the cabling round the front – it could become the most awesome virtual modular workstation!

Anyway, I can see where Blamsoft have gone with this and it makes a load of sense in terms of usability, access by newbies, and the Reason interface. But I just object to their approach. “You’ll soon be creating modular patches like a pro” they say – no, no you won’t. There’s nothing “modular” about choosing a modulation destination from an impossibly long menu of possible options – that’s what digital software synthesis is all about. And it’s awesome! It’s what the computer does best. They also say “without leaving the comforts of your computer” which is another massive misunderstanding about the nature of modular hardware. Gosh, this has really got up my nose. 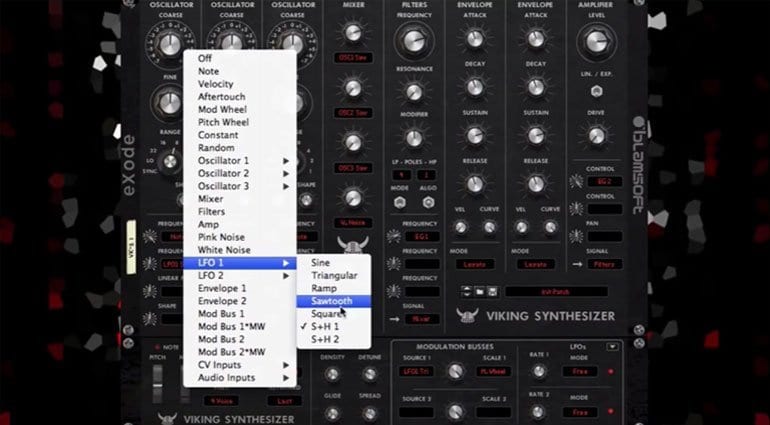 Ok, take a breath. What VK-2 offers is excellent. There are 3 oscillators with waveforms crafted to match the 921. 921 what you may well ask? Well they are referring to the Moog 921 modular oscillator. They also talk about ladder filters and the CP-3 mixer without telling you what they are about either. So not only is it not modular, but they talk about it being based on Moog modular units that we’re all supposed to just know about and require no explanation or the word “Moog”.

Right, so the VK-2 is basically a model of the Moog modular system in a handy Rack Extension for Reason. Why didn’t they just say so? It certainly looks the part. From the sound examples it’s capable of producing some awesomely thick and gooey analogue sounds. It’s also got 6 notes of polyphony so it can also be a floating, pad laden polysynth. It has a bunch of effects at the end of the signal chain so that you can build a complete sound in the one synth.

Just to further weird-me-out if you turn the VK-1 around then you’ll find a patch socket for every conceivable parameter. This means that it completely is a modular synth with all the cables you could possibly need. I thought the lack of cables was a feature? I don’t think I quite “get it”. 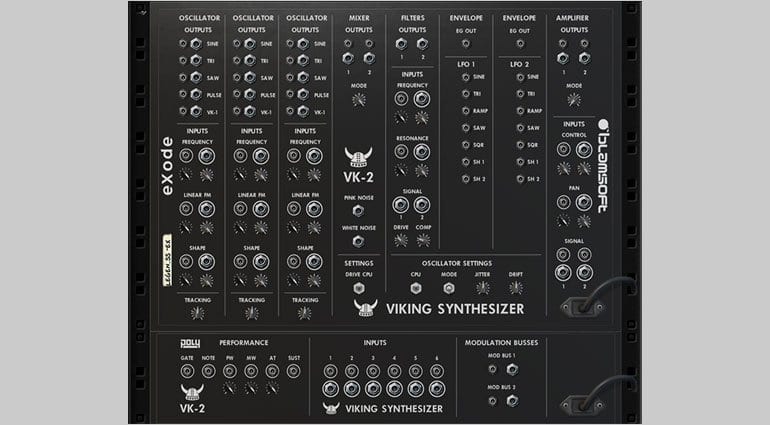 Patch sockets are very much in evidence on the back – how is that “cableless”?

So, anyway, don’t listen to me. Blamsoft have managed to wind me up with their strange marketing approach to what otherwise is a stunning (perhaps semi-modular?) synthesizer for Reason 9.2. There’s a demo version you can try out and loads of sound examples on the website. If you can get past the anti-modular modular talk then the video gives a great overview of the awesome power of this synth.

Confused? Go and try it out for yourself. Or buy it now while it’s on an introductory offer of €69. More information on the Propellerhead shop web page.