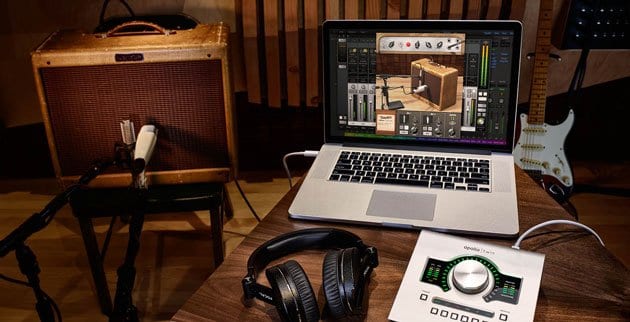 Universal Audio have spent over two years developing this recreation of Fender’s classic Tweed Deluxe amplifier. They chose the ’55 model and have modelled three different speaker combinations from that era as well. We first heard about this collaboration at Musikmesse and this is the first of hopefully many virtual amps to arrive from this partnership.

This amp simulation requires the latest UAD Software v8.6 to run. Of course you will need either a UAD-2 or an Apollo interface to use this software. However if you do own an Apollo then one of the really nice touches is that it can match the impedance of a real guitar amp, so that your guitar’s pickups react as though plugged straight into the real thing. That’s a well-executed idea, as this interaction does play a part in the sound of a good guitar and amp combination.

UA have also incorporated several different microphones for your virtual Tweed Deluxe. Because you won’t encounter any phase issues, you can get the sound you want and without the hassle of mic’ing up a real amp. Plus, of course, it’s a lot quieter to record as well.

The Fender Tweed Deluxe amp is in real life a very popular studio amp and has over the years been used on many famous recordings. It has that classic American sound that goes from really clean all the way through to some great overdrive tones. Universal Audio state that they have modelled all the individual components from the speakers through to the valves and everything in between to get the closest possible recreation of the real amps.

The official feature list taken from UA website (below) state that the speakers modelled are stock 1955 Jensen P12R, Celestion 25-watt Greenback, and JBL D120F. I would imagine that the choices of both speaker and microphone offer many combinations, making this a flexible amp for many players.