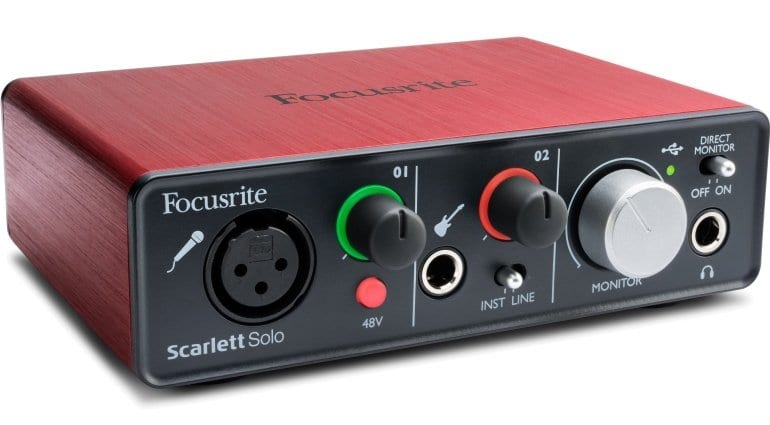 The Focusrite Scarlett Solo 2nd Generation offers 24-bit/192kHz audio and can be had as low as $85!  ·  Source: global.focusrite.com 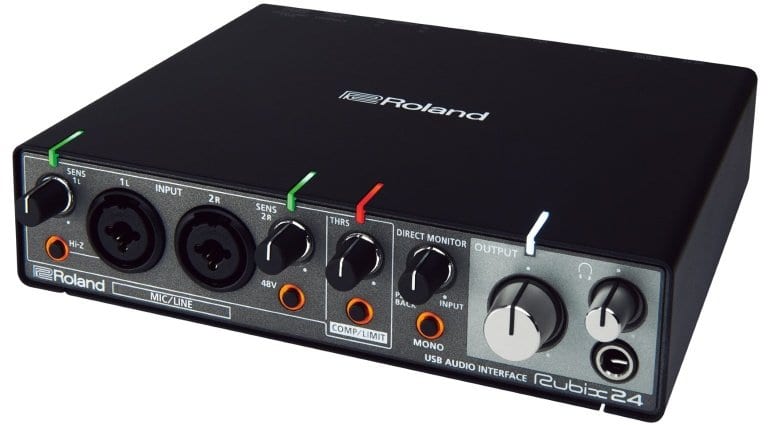 The Roland Rubix 24 is a smart choice for a mid-range workhorse.  ·  Source: roland.com/us 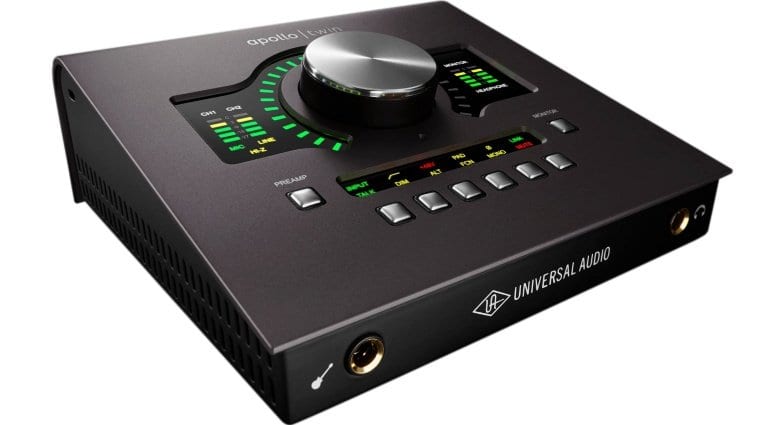 Think of the Universal Audio Apollo Twin MKII Solo as a cheap flight ticket to the promised land of professional audio. It might feel a little cramped in there, but it's the real thing!  ·  Source: uaudio.com 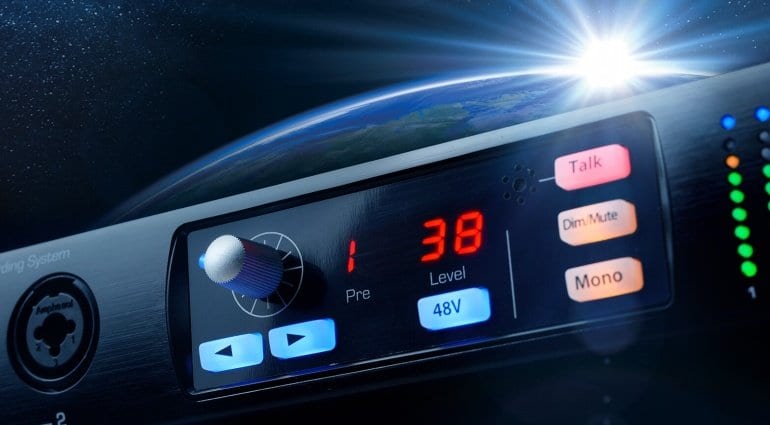 The Presonus Quantum can keep a mid-size studio going for years at a sub-$1500 cost of entry.  ·  Source: presonus.com 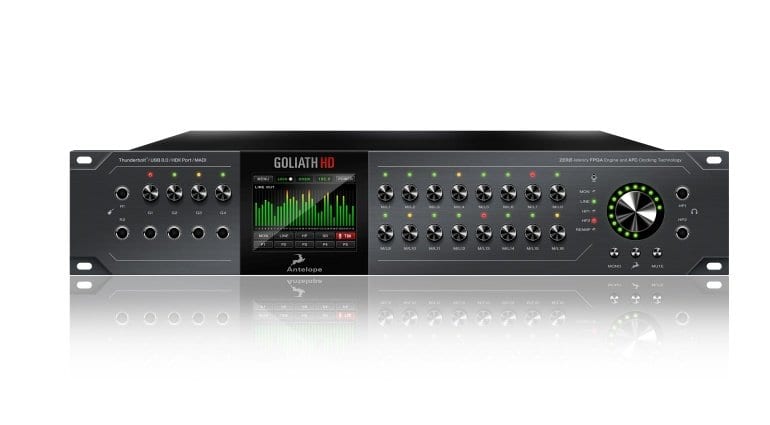 The Antelope Audio Goliath HD is a powerhouse with a price tag to match.  ·  Source: en.antelopeaudio.com

If your DAW or sequencer is the brain of your creative setup, the audio interface is at the core of your recording chain. It’s a fundamental component of any studio environment, no matter if it’s contained within the space of a desk in your bedroom, or a million-dollar facility. That’s why it’s important to keep up to date with the latest technological advancements, so you know what to shoot for when you choose to upgrade. And if you are new to the world of recording, yet to acquire your first audio interface, this selection will be a helpful starting point in figuring out that anxiety-ridden question: “What to get for $xxx???”

With a single exception, our selection includes only products announced and launched in 2017. They are spread in five price categories, reflecting different budgets – from entry-level stuff, all the way to top end material. After getting acquainted with them, feel free to do your own research, as every producer or musician has their own particular needs. You may find that products released a few years ago will be more useful to you, while buying a second-hand model is usually a great opportunity to maximize the gain from your spending. 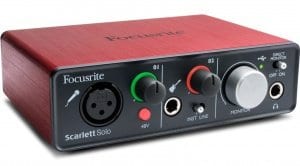 The Focusrite Scarlett Solo 2nd Generation offers 24-bit/192kHz audio and can be had as low as $85!

Probably the best sub-$100 interface of 2016 takes the spot in 2017 once again. Come on, where is the competition?! The Focusrite Scarlett Solo is the finest $85 entry-level audio interface you can buy brand-new. It has the basics of music recording covered with a single mic input, a single guitar/instrument/line input, 192 kHz / 24-bit signal, and low latency. It also comes with Pro Tools First, giving you a taste of professional computer-based audio recording and the means to make your first EP.

The one caveat we have are the RCA outputs. If you’d like to connect a pair of nearfield monitors with 1/4-inch inputs, you’ll have to use 3.5mm to 1/4-inch cables or adapters. This means spending a bit extra time and money on finding the right cables. Then again, your time as an aspiring recording engineer will involve many, many, many cables. You better get used to this as early on in the game as possible! 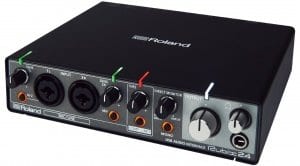 The Roland Rubix 24 is a smart choice for a mid-range workhorse.

In early 2017, Roland debuted the Rubix line. The Rubix 22, 24, and 44 may not be very exciting to look at, but they are smart choices for up-to-date, mid-range audio interfaces. The Rubix 24, in particular, hits the $199 sweet spot while offering just the right amount of functionality. This is a typical 2-in, 4-out USB interface that’s also class compliant with Apple gear and features MIDI In/Out ports. It handles 24-bit, 192kHz audio and has on-board compressor and limiter effects.

The selectable headphone channel assignments lets you create a separate monitor mix, while the loopback recording feature lets you capture the interface’s main stereo audio output without extra cables or routing. This way, you can easily record live streaming audio from your computer. The Rubix 24 comes with Ableton Live Lite, which is enough of the famous DAW to get you started, but not enough to really appreciate its capabilities. 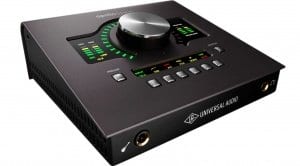 Think of the Universal Audio Apollo Twin MKII Solo as a cheap flight ticket to the promised land of professional audio. It might feel a little cramped in there, but it’s the real thing!

Universal Audio‘s hardware and software is world-class studio stuff, and its Apollo interfaces are held in no less high regard. The Apollo Twin MKII SOLO is everyone’s chance to get UA-level audio quality and recording functionality for under $1000, which is a tempting opportunity if you have the budget. The Twin MKII SOLO is a 2-in, 6-out Thunderbolt unit for Windows and Mac computers with 24-bit/192kHz audio converters.

What brings the Twin in a league of its own is the real-time DSP processing. It opens the gates to a world of low latency plug-ins simulating revered audio gear. Their authenticity will give you a hard (if not impossible) time distinguishing between the original units and their digital recreations. The only caveats we have are two. The SOLO unit has a single DSP chip, which means you might not be able to handle mixing sessions with UAD plug-ins as big as you want them, because you’ll run out of DSP power sooner than on a more expensive model. There are many ways to work through this, of course, such as bouncing and track freezing.

The second is Thunderbolt, a technology that’s still highly uncommon among Windows computers and being phased out by Apple in favor of USB-C. This makes the Twin SOLO less than ideal in a future-proofing aspect, though Thunderbolt isn’t going to die anytime soon. You’ll just have to be picky with your studio computers about that. 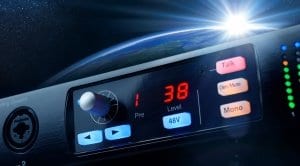 The Presonus Quantum can keep a mid-size studio going for years at a sub-$1500 cost of entry.

You’ll be putting down some serious cash for an interface in this category, so you have the right to be very demanding. Fortunately, Presonus likes a challenge. Its flagship Quantum interface comes fresh out the oven, following a splash announcement at MusikMesse in April. It’s a rackmount unit with gobs and gobs of functionality! 26 inputs, 32 outputs, pristine converters, on-board DSP for very low latency with Presonus’ processing plug-ins, ADAT, SMUX, two headphone outs, MIDI I/O, DC-coupled outputs for interfacing with Eurorack gear… really, Presonus threw in everything but the kitchen sink. The Quantum is the interface that could run your mid-sized studio over the next few years at a $999 starting price, depending on the retailer and country. The thing is about to hit the market in the next few weeks.

Beyond $1500 – sell your Mercedes and get the Antelope Audio Goliath HD! 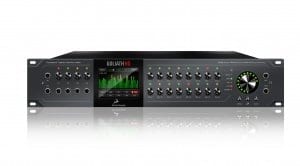 The Antelope Audio Goliath HD is a powerhouse with a price tag to match.

You clearly have a lot of money to spend, so let’s pull all the stops off and get down with it. When it comes to audio interfaces for rich CEOs, Antelope Audio is one of the prominent names in the category. Its Goliath HD rackmount is ridiculously powerful. It makes the Apollo Twin look like a kid’s toy and costs precisely ten times as much. Here’s what’s up – 16 Accusonic mic preamps with individual volume controls, 32 analog ins with 124dB of Dynamic Range, 32 analog outs with 129dB of Dynamic Range, mastering grade monitor outputs,8 instrument inputs, 2 transformer re-amp outs, integrated Talkback mic, 2 headphone outs, a pair of analog inserts, AES, MADI, ADAT and S/PDIF.

That’s 64 24-bit/192kHz audio channels for you to work with. Antelope Audio also threw in on-board DSPs to integrate its FPGA FX suite of studio plug-ins which comfortably spar against Universal Audio’s. Then there’s also touchscreen control from the front panel, alongside mobile and desktop apps for remote operation. Furthermore, Antelope’s proprietary HDX Delay Compensation makes it possible for any analog or digital input to be recorded in Pro Tools HD sample-accurate. Allegedly, no other interface does that.

The price, since you dare ask, is EUR 6995. (Europe) and probably around USD 7000 (America). More information is available here.

In 2017, it seems manufacturers basically handed the sub-$100 category to Focusrite and focused their innovation efforts on their high-end products. As for the mid-range product category, it’s merely adequate, not especially impressive. The good news is that top-shelf innovations, such as those demonstrated by Presonus and Antelope, will inevitably trickle down to more affordable products, once the technology becomes cheap enough to mass-produce. That aside, there’s a great product available for each budget, which is downright wholesome! You don’t have to spend a lot to get a decent sound going in your DAW. Hopefully, next year will see manufacturers paying more attention towards making their mid-range products really stand out, rather than live in the shadows of flagships.