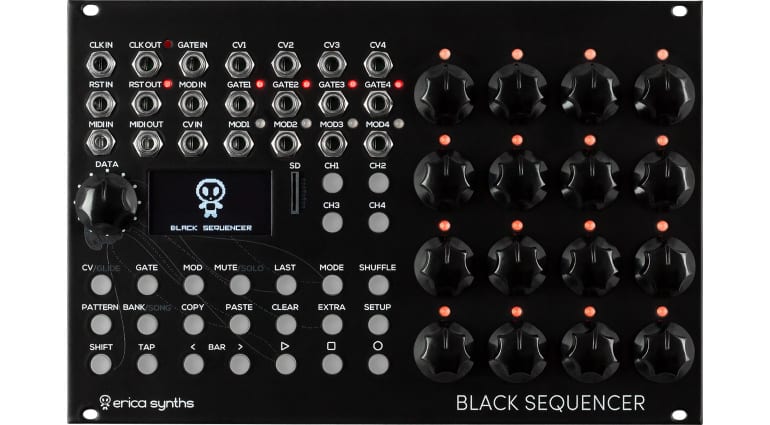 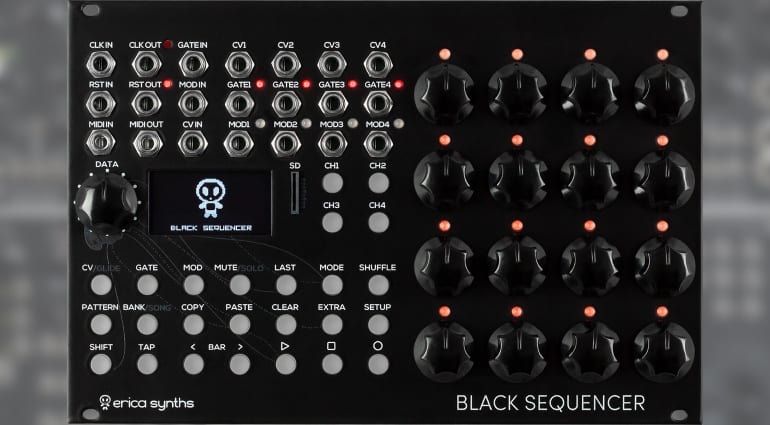 Erica Synths initially announced the Black Sequencer at Superbooth back in 2019. It’s taken a bit longer than originally anticipated, and we’re still not quite there yet, but it should finally become available in the next couple of months. Erica Synths already makes a couple of other sequencers such as the Drum Sequencer, but the Black Series was without a dedicated sequencer until now.

The Black Sequencer is a massive module. Erica Synths says that they designed it to give you the simplicity of good old-fashioned knob sequencing, while offering all the essential functionality of a modern modular sequencer. The right side features 16 rotary encoders for setting your values. The left side offers a comprehensive set of I/O, a display with a data encoder, an SD card slot and a large number of buttons for accessing all of that functionality.

The sequencer has four channels of Gate / CV / Mod outputs. It supports sequence lengths of up to 64 steps, and you can chain sequences together to form longer ones. The four tracks can have independent time divisions, multiplications, sequence lengths and shuffle values. Note, glide, gate length and modulation can be adjusted per step. The Black Sequencer also offers probability, repeats and ratcheting per step, and microtonal tuning.

In addition to the Gate, CV and Mod outputs for each channel, there are inputs for recording Gate, CV and modulation, and a built-in quantizer. You also get MIDI I/O for clock and recording, as well as clock and reset inputs and outputs.

The Black Sequencer stores a total of 256 sequences, organized in 16 banks. If that’s not enough, you can backup sequences to an SD card. The card slot also allows you to update the module’s firmware.

Despite its comprehensive set of features, the Black Sequencer seems to be pretty straight-forward to use. Expect it to show up in a lot of systems when it comes out!

According to Erica Synths, they’ve already produced a large number of Black Sequencer modules, but they’re still beta-testing the firmware. The module should become available in late May or June. The price hasn’t been announced yet.