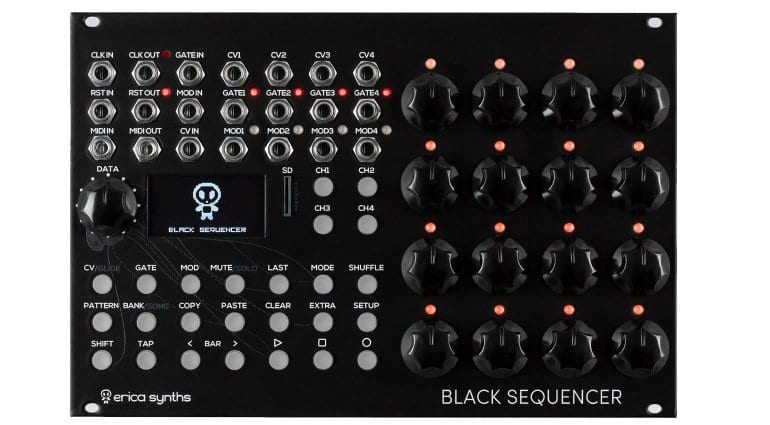 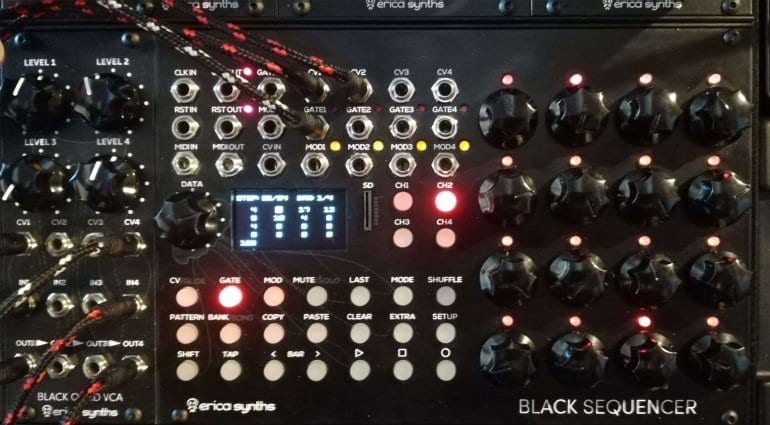 Along with the release of the tube infused Fusion VCO2 that we saw before the show Erica Synths has some other tasty modules coming along this year that they had on demo. In the Black department here’s an awesome looking Black Sequencer. (Check out our other articles on the new Black Spring Reverb, Black Stereo Delay and a Black Input module, Pico modules and Black System II – coming shortly).

This is a monster module that they were teasing photos of before the show. The right-hand side is simple enough with 16 knobs for setting your sequence. The left-hand side is a mass of patch sockets, buttons and a screen so there’s a whole lot more going here than meets the eye.

It was designed to combine the simplicity of knob-based sequencing with the ability to control up 4 channels with each step and save and recall sequences. The knobs then become multi-functional encoders. You select what you want to output and then use the encoders to set your values. Each of the 4 channels gets a CV, gate and modulation output. You can record up to 64 steps per pattern into 16 banks of 16 patterns. Note, glide, gate length and modulation can be automated per step. There’s probability, ratcheting and repeats per step. Each channel can be shuffled or run at independent time divisions. There’s a built-in quantizer but also micro-tuning. You can record straight in with performance mode using the inbuilt MIDI interface or you can randomly generate patterns with the touch of a button.

There are other cool things like turning off steps with a tap of the knob.

Erica Synths wanted to create something intuitive and yet fully featured and this is looked pretty phenomenal. It’s a wide module, perhaps they could have split it in two for easier rack accommodation. I also wonder whether you could link the 4 channels to turn it into a single track polyphonic sequencer. Just a thought!

No information on price yet but it should be available this year. Hopefully, I’ll be able to grab a video of it at some point.