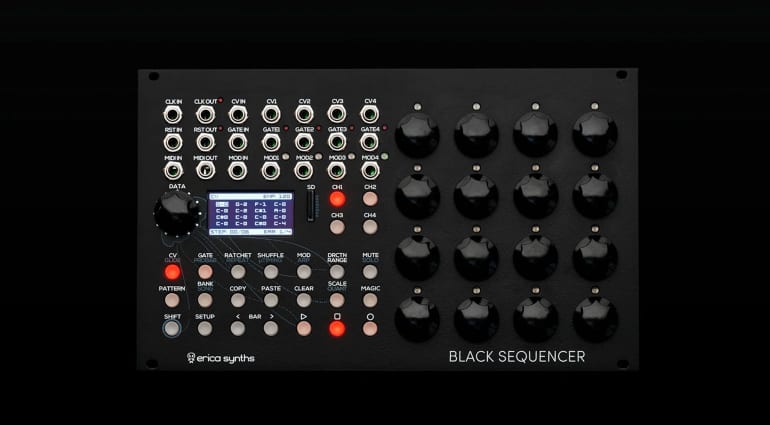 Erica Synths has been teasing us with the Black Sequencer Eurorack module since Superbooth 2019. Is it worth the wait?

Are you kidding? Of course it is! This is Erica Synths and their deeply black and completely stunning answer to Eurorack sequencing. They’ve taken their time about it, getting the right balance of features together and making sure it delivers. I’m lucky enough to have a prerelease version and I can tell you there’s been a lot of firmware updates over the last couple of months as they’ve tweaked and added features ready for release.

I can also tell you that it’s brilliant and I’ve only scratched the surface but I’ll leave a full review for another time. I’ve made a demo video of simple sequence which you can see at the bottom of this article, but here’s a slightly underwhelming teaser from Erica Synths.

What you have is a fairly chunky 42HP module that’s dominated by 16 rock-solid encoders that take on the multiple roles of pitch selection, gate length, modulation depth and turn steps on and off. Whatever mode you’re in the little screen gives you information about what you’re doing. It will show an overview of all the pitches or gate lengths for each bank of 16 steps but when you turn a knob it focuses in on that specific parameter and brings it up on the screen. The encoders click as you turn them which feels really nice and connects you with the changing parameters.

It has 4 tracks of sequencing and for each you get CV, Gate and Mod outputs. You also get a CV, Gate and Mod input, Clock in/out, Reset In/Out and MIDI In/Out. So you’re not short on modular integration. Each pattern can hold up to 64 steps and you can chain up 64 patterns up to 32 times each in Song Mode. Songs and patterns can be store on the SD card on the front.

For every step you get note, glide, Gate length, modulation, probability, repeats and ratcheting. There’s a built-in quantizer which makes note entry very easy but you can also go freeform or apply microtonal tuning. Each track has its own timing divisions/multiplications as well as shuffle. You’ll also find LFOs and envelope generators packed in there somewhere.

It has a button labelled “Magic” – all musical equipment should have a magic button. In earlier firmwares this little button would destroy anything it touched while showing you a cute animation of a cat peeking out from a top hat. The idea is that you press the Magic button and then press another button and it would work some awesome randomisation on those parameters. If you hit the channel select button it would re-write your entire pattern and if you hadn’t saved it you were screwed. More recent versions let you set a range in which the magic works so that it’s not quite so devastating. That little Magic button really does take you off into new directions.

Unlike many other hardware sequencers the Black Sequencer doesn’t have a percussion channel. You’ll often find a bank of 8 CV trigger outputs for running drums like on the new Korg SQ-64 or Arturia sequencers. Erica Synths has that assuredly covered with their Drum Sequencer module which is also available with all black keys. So, Black Sequencer is all about the melodies.

There are some caveats around this release. Erica SYnths says that the V1.0 firmware the CV IN, GATE IN and MOD IN inputs are disabled and MIDI implementation is limited to clock functionality. Their functionality will emerge in future updates.

The Black Sequencer will be released at the beginning of December for an ex-VAT price of €510.