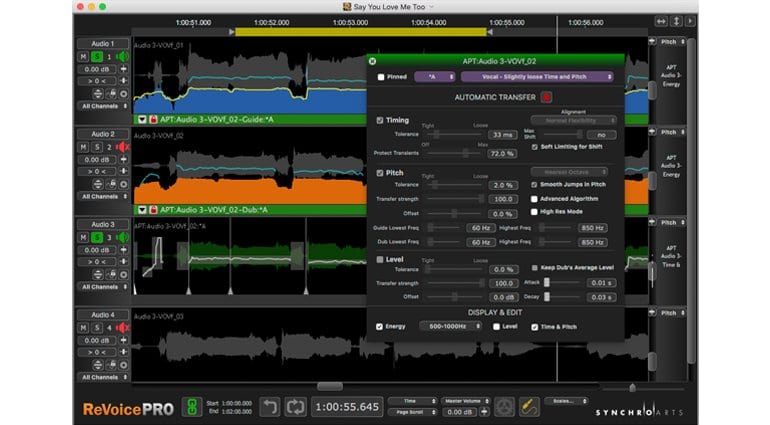 Last year we saw a significant update to Celemony’s Melodyne which expanded its tool set, such as time stretching and editing in a multi-track format. Coming from the other direction, primarily offering time stretching and editing tools, Revoice Pro has now become a serious pitch correction tool. Having met somewhere in the middle, this latest update from Synchroarts places Revoice Pro in a very strong position for several customers.

With version 3 of Revoice Pro being released in 2014, there are now some important bug-fixes across all platforms, and some new features which are proving how powerful this software is. There is so much to offer inside Revoice Pro now, which is attractive to many walks of the pro audio world; from music production through to ADR & post production houses. This is now a very comprehensive package well worth considering.

Here’s a list of the new features and updates found in version 3.2:

Personally, I am a huge fan of the way Synchroarts have always managed to sync audio files together via time stretching in a very elastic manner. It doesn’t sound heavily processed in most scenarios either. There still isn’t another software package out there that offers this highly-useful tool, which once you use you can’t believe you’ve been without it. I’m really keen to try the ‘doubler’ effect version 3 can now offer from a single take, this looks very cool.

This is a fairly major, but free update for all existing users. For those that are now considering Revoice Pro 3, there is an offer currently running until the end of April for 336.60 GBP. Rvoice Pro is engineered to be a stand-alone program, but it also includes ‘link’ plug-ins in Audio Suite, AAX, Audio Unit and VST3 formats.