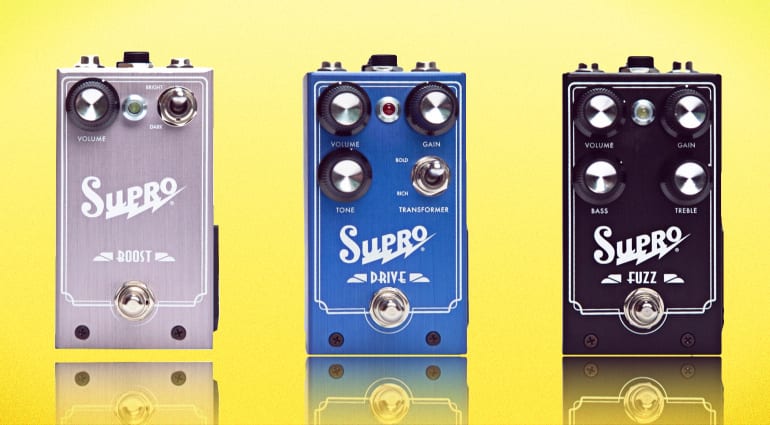 Back in 2016, Supro released three pedals that went on to establush a solid reputation amongst guitarists. Now Thomann has the very same pedals on sale – for around 50% off the manufacturer’s recommended price. This selection of three pedals – a Boost, Drive and Fuzz – are a great choice if you’re looking for some new toys to give your tone some extra kick!

All three of these Supro pedals are housed in solid aluminium enclosures and deliver classic analogue retro-sounds of the 1960s  But they also have modern features too, including an expression connection for extra functionality and a battery compartment on the side. Of course, with modern construction and build quality, they will also fair a lot better than the vintage counterparts that inspired them…

The Supro 1303 Boost is a clean J-FET Boost. But in addition to the mandatory volume control for up to 20 dB gain, it also has a bright mode (high pass, 6 dB / octave), dark mode (low pass, 6 dB / octave) ) and a natural mode without any colouring. The volume can be controlled via an expression pedal (TRS). The price has dropped from EUR 195 to 139. 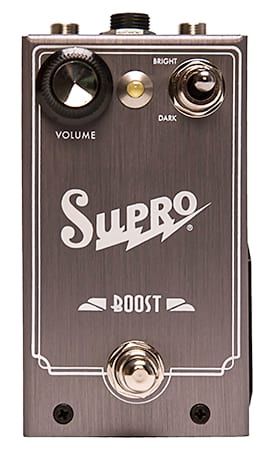 The Supro Drive has its origins in the sound of an overdriven Class-A Supro amplifier. The pedal contains an output transformer, which can be influenced via a small toggle switch for more overtones and compression. The controls are Volume, Gain and Tone, making it simple to operate and dial in your tone. Using an expression pedal, you can control the gain of the drive, which makes this pedal pretty flexible in a live scenario when you’re busy playing. The drive can be operated with 9-18 Volts and costs only EUR 139 instead of 229. 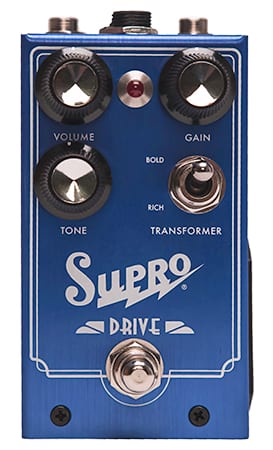 Last but not least is the 1304 Fuzz pedal. This is a hybrid design including both a NOS germanium transistor and high-gain silicon transistor, putting both of these different fuzz tones at your disposal. Supro has aimed to offer the dynamics of the Fuzz Face, the sustain of the Big Muff and the overtones of the Tone Bender. In addition to the Volume and Gain controls, the 2-band EQ with bass and treble adds versatility. The latter can also be controlled via the expression pedal. You can get this one for EUR 129 instead of 215. 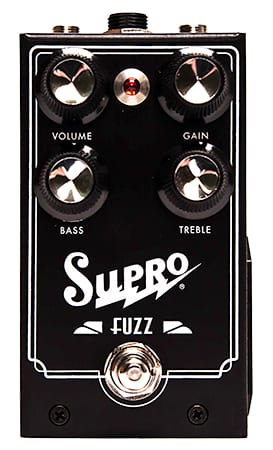