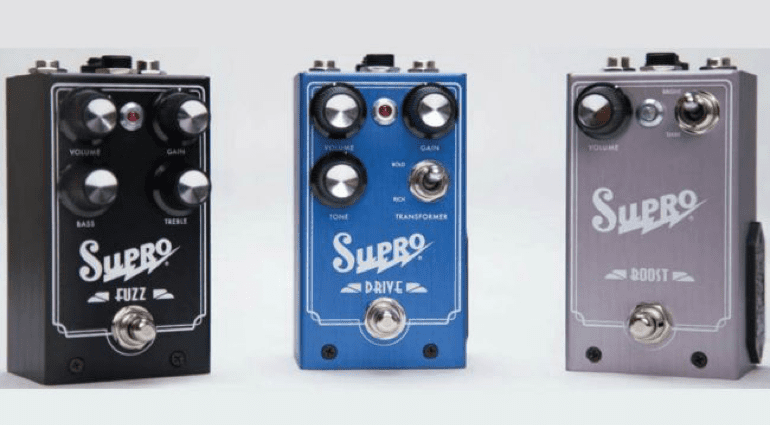 Supro’s new SP1303 Boost, SP1304 Fuzz and SP1305 Drive pedals are all made in Port Jefferson, NY, USA. The pedals were announced earlier this year and are getting their European debut at Musikmesse.

Supro have waited for the Musikmesse 2016 show to release their three new pedals in the European market. The company came back in 2014 with its range of classic vintage amps and is now about to go into the pedal market as well. Each pedal has the company’s Supro logo emblazoned on the front and they all have simple looking control layouts. That should make it easy to dial in sound on all three, which for me is always a bonus. Each features anodised, brushed-aluminium enclosures, and all have a true bypass signal path.

While the Supro Boost can add another 20dB of gain, the company have also stated that it won’t add any unwelcome background noise to your signal path. It’s a preamp with both a High and Low pass filtering option via a toggle switch on the front of the unit. There is also an input for an optional expression pedal which turns it into a volume pedal.

Supro Fuzz is a NOS Germanium fuzz pedal with a second silicon gain stage. It also has the ability to use an external expression pedal, but this time it controls the treble of the fuzz. This sounds like an interesting idea and would be potentially very useful, as treble frequencies really do change the sonic character of boxes like these.

Last of the bunch is the Supro Drive, which seeks to mimic the Supro drive sound from their amp range. Again, there is an input for an expression pedal and this time it can control the amount of Drive of the pedal.

This is an interesting set of pedals, all with some optional control elements. They should be available in Europe post-Musikmesse.