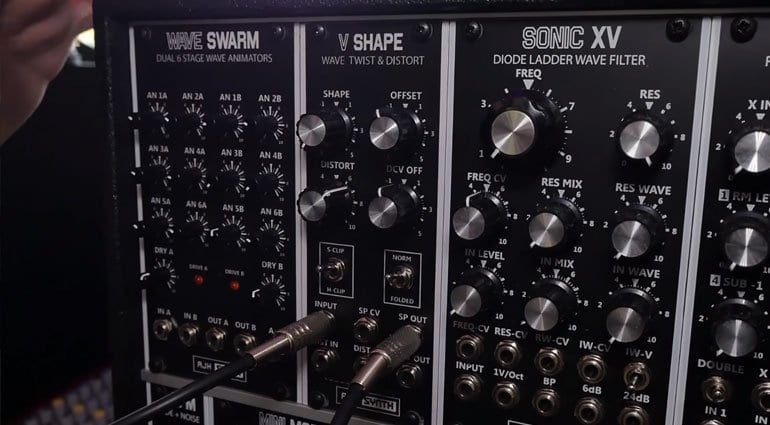 Alan Hall of AJH Synths is at Superbooth showing off his latest modules, the deliciously named Wave Swarm and the V-Shape.

It’s a dual 6-stage wave animator which sounds almost as exciting as Wave Swarm. It can take a basic waveform and make it sound like 6 or 12 VCOs. Simple turn up the knobs to add the appearance of oscillator upon oscillator, slightly detuned and…. animated. The 12 knobs are set up as 3 lots of two channels of pairs, if that makes sense. So there are two inputs, A and B, that can be used separately through 6 knobs each, or combined at the A+B output. If also has a soft clipping circuit built in to ease it into warmth when driven.  The combinations, supersaws and complex waveforms that result are truly sumptuous.

The Wave Swarm is a couple of months away and should cost around £250.

The V-Shape is all about wave twisting and distorting. Feed it a triangle waveform and it will morph and tilt it in a way resembling pulse width modulation. It will work on anything except a square wave. The other half of the module is distortion and the wave shaping input can be fed directly into the distortion circuit, or you can access it separately externally. Use them together or independently – that’s up to you. Finishing off the feature set is a switchable wave folder.

Same time frame for the V-Shape at a cost of around £195.