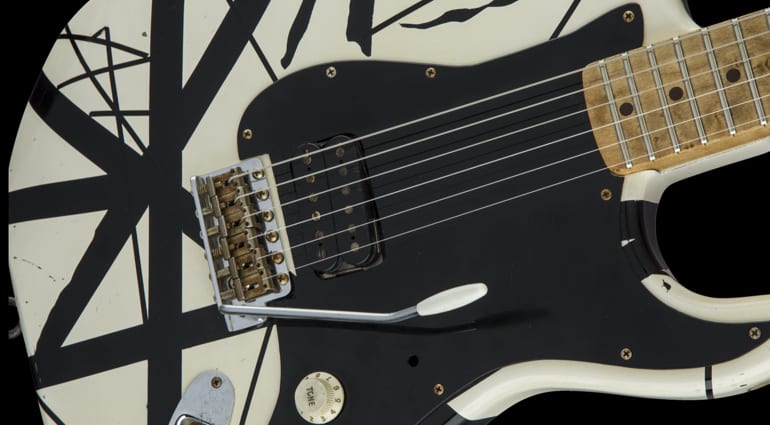 Before the Floyd Rose locking tremolo system, before the red and white stripes, Eddie Van Halen was assaulting the rock world’s ears with Eruption – and did it on a guitar just like this one!

I’m pretty sure that when every guitar player in the world heard Eruption for the first time on Van Halen’s debut album, they went “WTF?” I know I did. To celebrate the 40 year anniversary of that record, EVH has announced a limited run of ‘those Strats’ to mark the occasion.

They aren’t cheap, and there are not many of them, but most fans will appreciate the reason why this was such an important guitar in rock history.

This is a ‘box fresh’ Eddie-hasn’t-toured-it-yet version of Mr Van Halen’s original Black and White Strat. It comes with a single EVH humbucker, vintage Fender trem and single ‘Tone’ Volume knob. You even get a can of 3-in-One oil can in the case, which is what he used to keep it lubricated and in tune!

There will be 40 of these available worldwide. Each comes in a case full of the things that Eddie used back then, including the chain guitar strap, Fender Super Bullet strings and even a hand-signed copy of that debut album.

Yes, it has the eye-screw strap hooks and a 61071 stamped neck plate as well, so there will be plenty for fans to enthuse over here. The price is obviously a little eccentric and also references 1978. Hopefully, dealers will be offering this a bit cheaper. 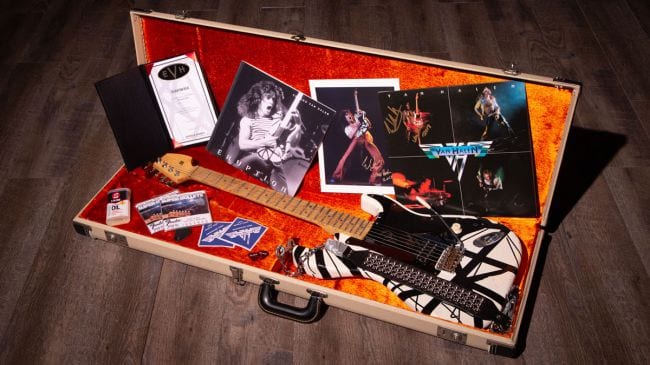 This guitar has the same specification as above, but it’s made to look like it has lived through a few EVH tours. Expect this one to be a little pricier. They even aged the hard case it comes in so you can feel like you’ve been on tour yourself! With 30 0f these available worldwide, you’ll need deeper pockets. It costs a fair bit more than the non-relic version above.

If you thought the last one was expensive, then hold on tight… This puppy is USD 25,000 and has been played by Eddie himself. To prove it, they send you a USB stick with a film of him playing Eruption on your guitar and signing it. Only 8 of these will be sold, making the total number of guitars being made 78!