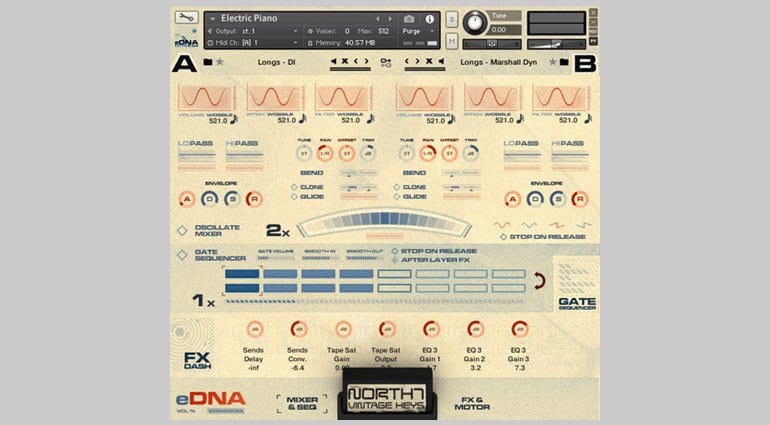 Everybody’s at it. We just can’t seem to get enough of decrepit old keyboards. Spitfire Audio insist that they haven’t yet been sampled to death enough and offer four of their own sampled pianos. It’s from their “Producer Portfolio” series and they’re calling it the North 7 Vintage Keys.

The North 7 bit refers to the N7 Studios who Spitfire Audio collaborated with on this collection of samples. Their task was to find and sample 4 pristine examples of fabulously famous keyboards from the 1960’s and 70’s without actually ever mentioning their names. The result is a whopping 24.9GB of what they are calling the Spitfire Electric Piano, Electric Clavichord, Stage Piano aka The Wurly, and the Electric Piano Bass.

The website talks a lot about the history of these instruments, what tracks they appeared on and who played them. And actually it can’t help but create warm feelings somewhere deep inside. There’s something about these instruments, something about the sound of electric pianos from that era that fiddles with all our romantic buttons. Listening to the sound examples the sonic quality is undeniable – they just take you away somewhere.

The 4 instruments appear as library in Kontakt 5 or the included Kontakt player. The interface is delightfully vintage. Not trying to mirror the look of the keyboards but rather the controls are mounted to Spitfire’s eDNA interface giving you a very tweakable control surface. There’s a stack of curated presets in there, ranging from classic to weird and very funky.

Probably the most interesting of the 4 is the Electric Piano Bass, based of course on the Fender Rhodes Piano Bass which was made famous by Ray Manzarek of The Doors.

When Waves released their Electric 88 piano last month I wrote a piece on my Top 5 virtual Rhodes. Since then e-Instruments have released their amazing Session Keys and now we have North 7 Vintage Keys to add to the list. What is it about these keyboards that keeps us coming back?

North 7 Vintage Keys is available now for Windows and OS X for Kontakt 5 for £199.

For more information head over to Spitfire Audio’s website.