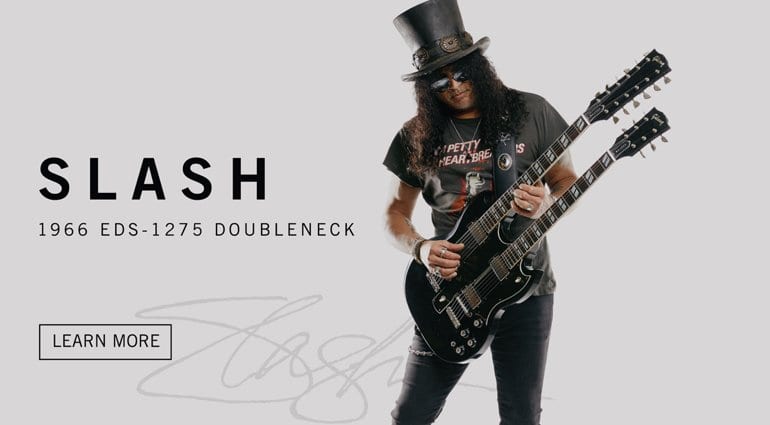 The new “Gibson Custom Shop Slash Signed 1966 EDS 1275 Doubleneck Replica Aged Ebony” is hitting dealer sites for pre-order today and may be the most expensive Slash signature model to date. And that’s saying something!

Over the last year or two, Gibson has issued a number of very expensive guitars associated with Slash. Remember the Brazilian Dream? That one cost USD 13,000. Or the Slashbird? USD  7699. The Slash 1958 Les Paul “First Standard” #8 3096? USD 11,999. The latter was available unsigned, priced USD 4000 cheaper. Just to give you an impression of what Slash’s autograph can cost you.

This aged replica of the 1966 EDS 1275 Doubleneck is the latest Slash Signature model. This isn’t a standard model, being built in the Custom Shop in Nashville in a production run of only 150 worldwide, so it is relatively limited. Adding to the exclusive appeal is the fact that these are all signed by ‘the Cat in the Hat’ himself. But for me this is really one for the Slash/Guns’n’Roses fan, as double neck guitars aren’t exactly practical to play for most of us.

Slash purchased the original in 1990 and used it throughout Guns N’ Roses’ legendary Use Your Illusion world tour, adding the chime sound of a 12-string guitar to his live set. It is the sort of guitar that is perfect for stadium rock, so if you are Led Zeppelin or Guns’n’Roses, great. But other than that, it is really just a boat anchor for most players and quite impractical to drag around to small gigs.

Each guitar is loaded with a set of Custombucker Alnico III humbuckers and the body is made from lightweight mahogany. It needs to be, as these things are heavy as hell. 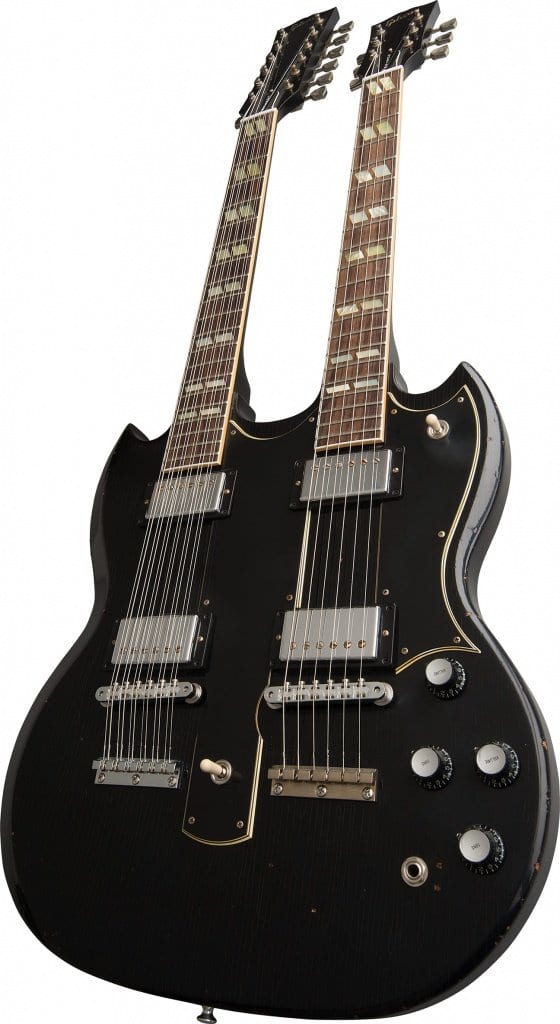 And then there’s the eye-watering price tag. If you want one – and you will really, really have to want one of these – be prepared to part with over ten thousand pounds. That’s well over 13k in US dollars (USD 13,299 is the official asking price in the USA), making it probably the most expensive Slash guitar yet. At the time of writing you can pre-order this instrument but you’ll have to do it fairly quickly, as these will probably sell out soon .

* This post was updated: originally, we said the production run was 125 guitars, but we’ve been advised by Gibson that the run will be 150. We’ve changed the post to reflect this.