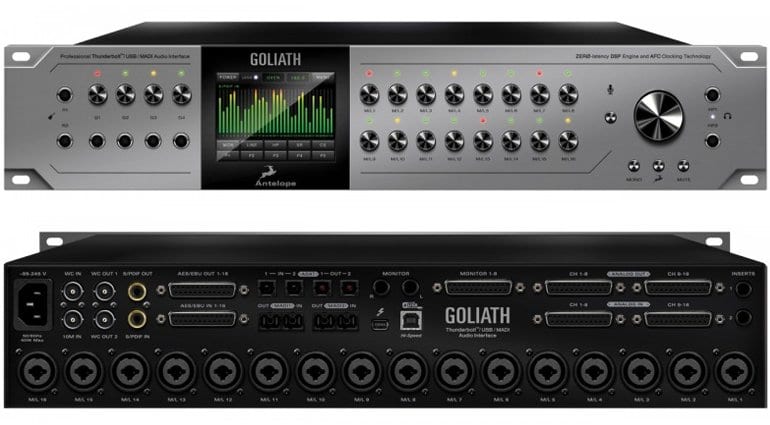 Spotted on the Antelope Audio booth at NAMM 2016, a keen eye noticed a new piece of hardware. Suitably called ‘Goliath’, early information suggests this will be a new audio interface with an incredible spec. Not yet officially released by Antelope, and with nothing on their own web site, details are scarce and unconfirmed. However, this could be a new benchmark for modern audio interfaces.

Antelope have a reputation for producing some of the highest-quality converters available and some of their existing audio interfaces have a high level of spec too. Their Zen Studio is a prime example, providing competition to the likes of UAD, Focusrite and Apogee.

The audio interface market has seen some major developments recently with a trend to use Thunderbolt connectivity to achieve lower latency. The trouble for some is that Thunderbolt isn’t readily accessible by all Windows users, so there’s a need for multiple connectivity options. What we need is a unit that offers Thunderbolt and USB, comprehensive on-board DSP for monitoring options and additional mixing power, with an I/O list to cater for every eventuality. Early information suggests that Goliath might just be the answer.

Here is the most reliable spec list I can find for the new Goliath, sourced from UK distributor KMR Audio:

I am really keen to learn more about this product. For me, besides the spec and hopefully high-standard from such a brand, the points of interest are the re-amping outputs and audio tools for guitar. This product is likely to be the first result from the new partnership between Antelope and Overloud, which should be interesting in itself. My only concerns lie with what the on-board DSP is really capable of and what it sounds like, and of course the price.