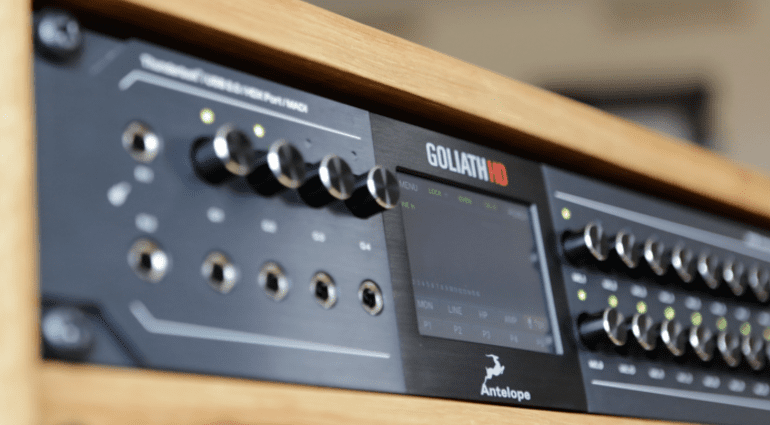 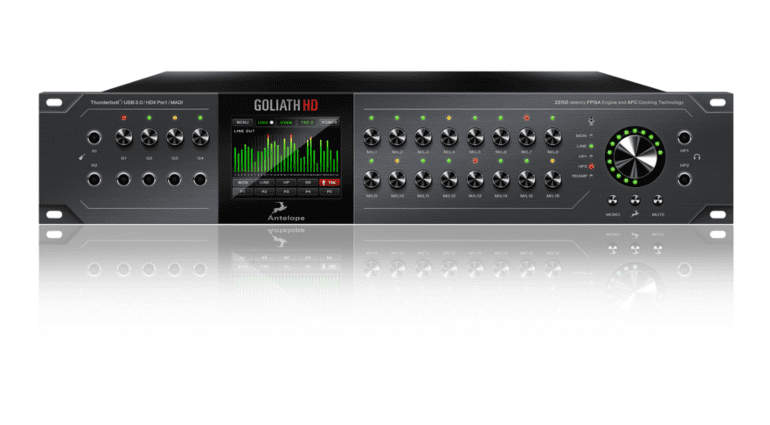 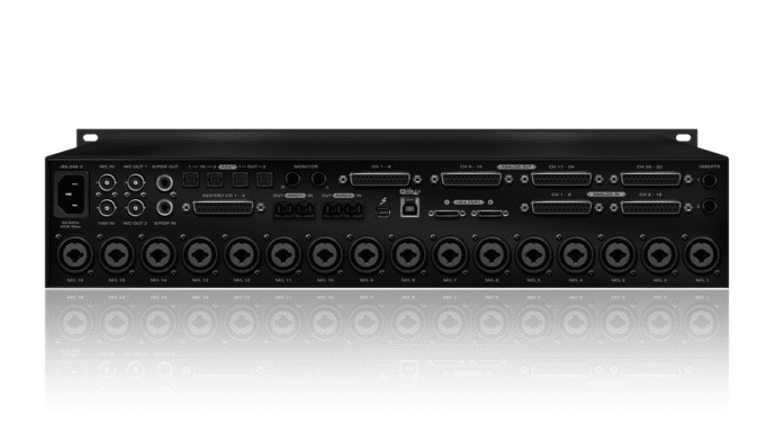 “Best dynamic range”, “lowest THC specs”: Antelope are pulling no punches in their marketing for the new Goliath HD interface, launched at Frankfurt Musikmesse yesterday. Hot on the heels of their Orion 32HD interface premiered at NAMM 2017, the Goliath HD is a big, bold statement of intent with 64 channels, 16 mic preamps, twin MADI ports, touchscreen display and a whole lot else besides. No wonder they are billing this as their new flagship product.

The original Goliath 2U audio interface reached markets in August 2016, and this unit adds an interface to their range that’s, well, slightly larger and a bit more capable. It has 16 analogue XLR inputs each with an ‘Accusonic’ preamp and its own volume control, 32 analogue inputs on D-Sub connections,  32 analogue outputs also on D-Sub, a pair of mono jack monitor outputs, 8 instrument inputs, 2 re-amp outputs, two headphone outputs and there’s even a built-in talkback mic. Oh, and twin MADI ports, S/PDIF, AES/EBU and ADAT. Phew.

So what’s new compared the original Goliath? At the moment Antelope don’t have an easy-to-use product comparison feature on their site, but it looks like the HD version has the Digilink connection from the Orion HD as well as 8 additional analogue outputs. One of the talking points about the Goliath was its low latency at 2ms, and I assume the latency here will be equally impressive.

The Goliath HD supports 2nd generation Thunderbolt and USB 3.0 as well as MADI. Antelope’s DSP engine using their FPGA technology is also on-board, letting you run emulations of “vintage” gear on all your I/O channels. And with the Digilink capability, it will integrate fully with Pro Tools HD, although it will no doubt also serve ably as a solution for native DAWs.

Dynamic range seems to have been a particular focus in the Goliath HD’s development, with the monitor outs offering 132 dB and the analogue outputs on D-Sub 129 dB. Syncing to other gear will be no problem here, either, you can choose Wordclock or 10M Atomic as your clocking format. There’s iPad connectivity, too, so you can adjust the volume on your preamps using your Apple tablet while walking around.

Antelope seem to want to pack so much into one 2U interface that you get the feeling that this would be the last interface you’d ever buy. But there’s no AoIP connectivity on-board, so you’ll need a bridge if you want to go that route. Given the immense feature set, though, I doubt that will put many buyers off. As a comparison, the Focusrite Red 8Pre has AoIP, but lacks on-board DSP, while the Goliath HD also has an additional 8 preamps.

No prices have been officially announced yet, but the original Goliath lists at EUR 5195, with retailers like Thomann offering it at EUR 4595. So a list price of EUR 5999 seems like a natural price point for the HD version, and perhaps some retailer somewhere will eventually be able to offer it nearer five grand.

Here’s the superlative-laden marketing video for the Goliath HD. Be warned: it contains phrases such as,

“A sound so stunning you’ll be struggling to find new ways to describe its clarity”.