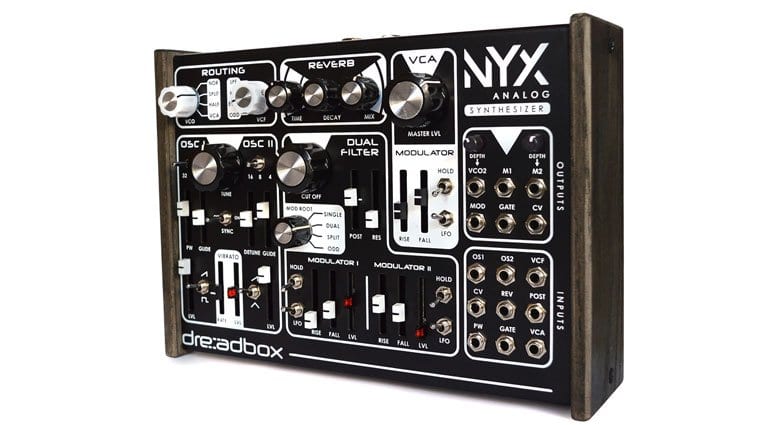 Dreadbox have released a new analog synth in a desktop box. NYX is a paraphonic analog synthesizer from the same mold as their Erebus and Hades box.

There’s not a whole lot of information on this little box as yet other than a list of specs. It describes itself as “Paraphonic” which is one of those confusing terms that often refers to polyphony when really it shouldn’t. Paraphonic refers to the signal from however many oscillators or notes routing through a single filter and VCA. Dreadbox describe the Erebus as having 2-note “paraphony”, which, as I understand it, is not really the correct usage. Anyway, from what I can see there’s two oscillators that are going to a single filter and VCA making it “paraphonic”. So what’s the polyphony? I don’t know – probably duophonic or they play in unison like the Erebus. But let’s try not to get confused about it all.

Otherwise there’s a dual state 24 or 12dB filter, a triangle wave LFO. A “Triple Unique Envelope Generator”, which sounds interesting, and it can also be used as an LFO. It has some “Unique Routing” controls allowing for an open architecture. There are 15 patch points which make it very patchable into other stuff. I think that also reflects on the routing possibilities.

In place of the Echo effect found on the Erebus they have a “Unique Reverb Effect” (lot’s of usage of the word “Unique”) by Crazy Tube Circuits. I really liked the Echo on the Erebus and it’s the sort of thing I thought was worth keeping on every Dreadbox ever makes, but hey. It has a lot more sliders than knobs which is a bit of break from their other synthesizers.

Frustratingly there’s currently no sounds demos or videos so there’s no way of knowing whether this is as awesome as all of Dreadbox’s other stuff. But I suspect it will be. I think this desktop form factor is a real winner because it opens it all up to those of us unwilling to invest the time and money into a Eurorack solution. And more fun for everybody is always a good thing.

The NYX is labelled up at $679 and should ship in the New Year. More information on the Dreadbox website and please let me know when they post any sound or video examples.