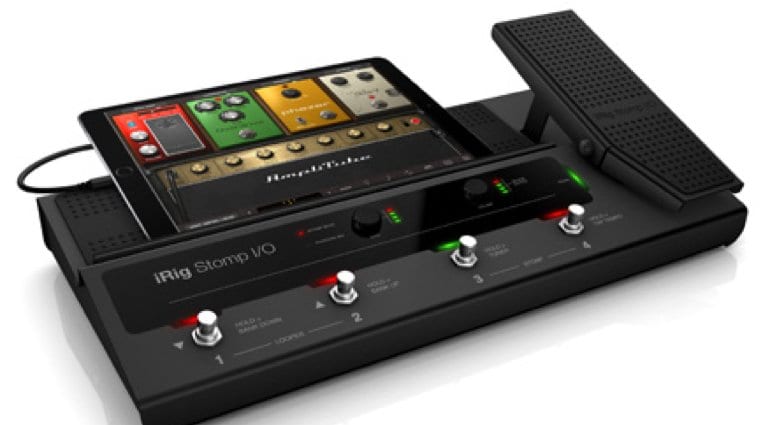 The new IK Multimedia iRig Stomp I/O is launching today at NAMM and it allows you to take your sounds out live and gig with them, with the integration of Apple’s iPad you can also control your effects easily on the fly.

This is a USB pedalboard/floor effects/virtual amp controller that has an audio interface with MIDI for iPhone, iPad, Mac and PC. It comes bundled with guitar and vocal processing, plus the ability to record via software and can be used both live and in the studio.

The feature set looks pretty decent and I really like Amplitube as a software amp and effects solution for recording, as I have been using it since version 1.

I’m just going to put this out there, but iPads aren’t exactly ‘roadworthy’ and reliable when at floor level where they can get stepped on or have beer swilled over them. In fact, they are pretty fragile and so this could be the major flaw with this product for me personally.

Especially with companies like Line 6 and their Helix and Helix LT being so robust and gig worthy. This iPad integration would be fine at home or in a studio, but I would not personally trust it for a professional gig as I have personally seen way too many broken iPads and they ‘go out of date’ after a few years and become obsolete after too many iOS updates etc.

It is pretty cheap though, but of course, you will also need an iPad and that is another £339 on top!