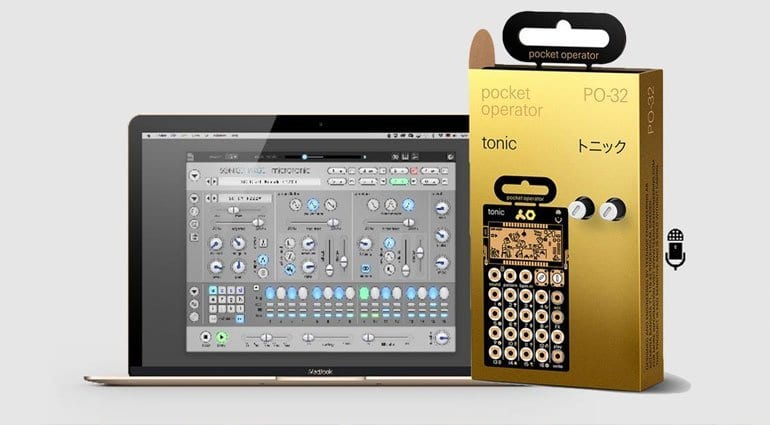 The teaser for a new Pocket Operator seemed to be all about a microphone. This led me to the extraordinary conclusion that it was a sampler. Oh no no. There is a microphone but it’s being used to “hear” data transfers from the Tonic VST software companion – a bit like receiving a fax.

This new Pocket Operator has been created with Magnus Lidström from Sonic Charge. It allows the transfer of sounds and patterns between the PO-32 and the Sonic Charge Microtonic VST plug-in. Simply, and slightly ridiculously in these days of Bluetooth, you hold the PO-32 up to a speaker while the Microtonic beeps and squelches out the data. It gets picked up by the mic and dumps itself as a new sound or pattern on the PO-32.

Ultimately the PO-32 is a drum machine and this sound transference gives it access to a load more sonic possibilities. I like the idea of being able to transfer something you’re working on to a small handheld device to play with later. Although…. don’t iPhones and such like offer that sort of functionality with iOS versions of synths and stuff? Anyway, it’s a cool and groovy idea using old tech that’s still useful.

More information will hopefully become available on the website. Here’s a video of the transfer in action. Shame it wasn’t a sampler though.