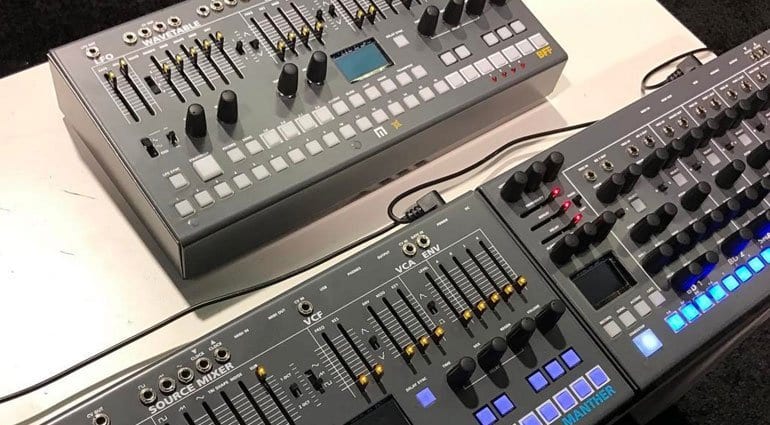 Malekko Heavy Industries had three new products on show but sadly none of them were functional. Something about a snow storm and stranded PCBs. Anyway, they were happy to talk about the Manther monosynth, Mr. D drum machine and BFF Groovebox even if we couldn’t hear them.

It’s a big desktop box – they are all big desktop boxes. The Manther is a monosynth running a CEM3340 oscillator. There’s an analog 3320 VCF section, with an analog VCA and envelope. It has a “pretty sweet” sequencer and is “super awesome”, which is nice. The layout gives you this wide row of lit pads or buttons arranged in a step sequence style. The majority of controls are on sliders which is unusual these days, although recently championed by the Behringer DeepMind 12.

Next up is an all-analog drum machine with all the usual range of sounds. It has individual outs and trigger inputs and all the sounds are designed to be as nasty as possible. There’s bit crushing, compression and drive on the outputs, along with 64 steps in the sequencer. There’s a probability function per voice on the vari-gate with repeat delays on swing. This can create some monster amounts of polyrhythms and chaos.

In collaboration with a guy named Scott (I’ve not fully understood the relationship at this point) we have a groovebox. It features a digital oscillator and 4 voices. A totally morphable wavetable provides the sound source. Then there’s modulation and wave-shaping before heading to the VCF/VCA combination. Each voice can be sequenced individually.

All three have a very similar look and feel and it’s really disappointing that we can’t get to see them working as the vocal description is probably not doing them justice. Apparently, they plan to get demo videos up after NAMM. More information will hopefully appear on the Malekko website. 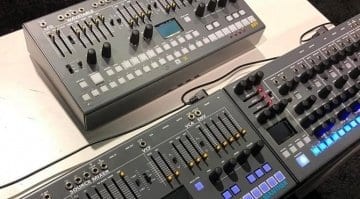 That is Scott from the Harvestman I beleive, the man is a genius when it comes to wavetable!!!

and we heard nothing…. so maybe shipping in september