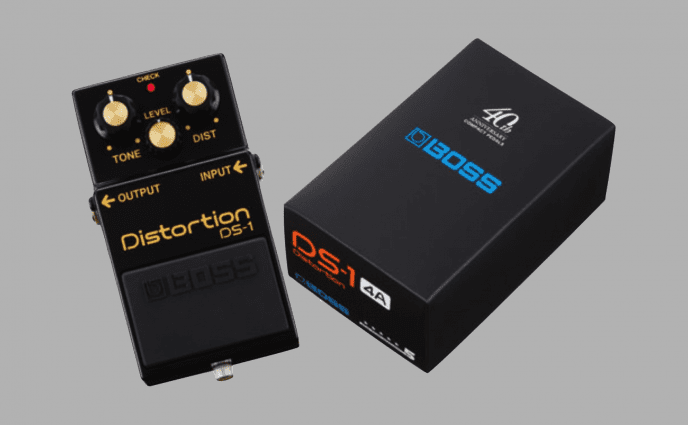 Boss are releasing the DS-1-4A Distortion for 2017, a limited-edition stompbox that commemorates the 40th anniversary of Boss compact pedals. Launched at NAMM in a sleek black finish, it will only be available for a limited time.

This limited run version of the normally orange-coloured DS-1 Distortion pedal will only be made during 2017 and after that, it will cease to be sold.

Boss have chosen to make it in black and given it gold lettering, gold knobs and a vintage style silver thumbscrew (modern Boss pedals use a black plastic one). The Boss website states they will be launching more ‘anniversary’ releases in 2017, as it’s been 40 years for a few of their products, so expect more of the same.

The DS-4A comes in a special box with the Boss 40th anniversary logo, just so you don’t forget it is celebrating something…

Probably a good idea to buy a few and put them on Ebay next year and double your Money – or maybe not!I have never been a fan of modern DS-1 pedals, but I bet a lot of people will buy them to flip them for a profit once Boss stops making them.