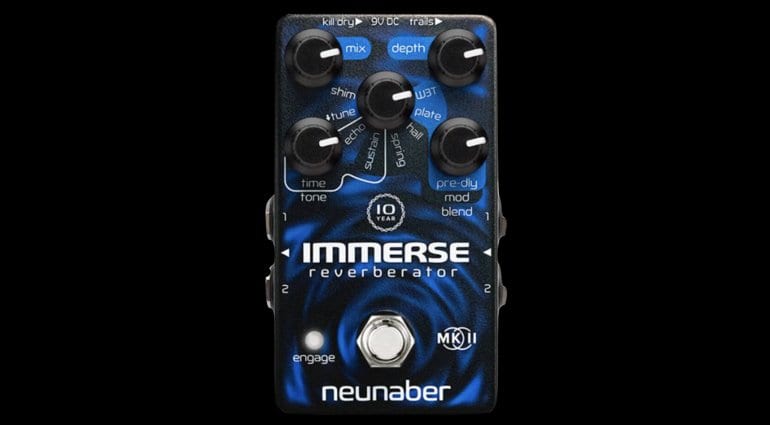 Neunaber is celebrating its 10-year anniversary with limited-edition version of their ever popular Immerse Mk II reverb pedal.

You get controls for Mix, Depth, Time/Tone and Pre-Delay/Mod. Plus the following 8 different reverb algorithms.

Each of these limited edition Immerse Mk II pedals is built to order in small batches. But essentially it is the same pedal as before just with a fancy new retro styled graphic and numbered by hand.  You still get the original eight stereo reverbs of the standard Immerse Mk II pedal, so not sure this is going to make anyone rush out to buy one.

They are available from August 31 and will run until they run out of supply? Which to me sounds like a marketing ploy as surely it is just a graphic? They state to expect 2-4 weeks for shipment on the website. Therefore, if you want one then be prepared for a wait until you can receive yours in the post.

I’m not convinced by the new graphic, but if you were going to buy the regular version the pedal anyway then this would make it a bit different. Apart from the marketing hype/’celebration of 10 years in the pedal business’, this is still a great reverb pedal.

You can click the link below to the official site and order one or just watch the demo video of it in action to what all the fuss is about.