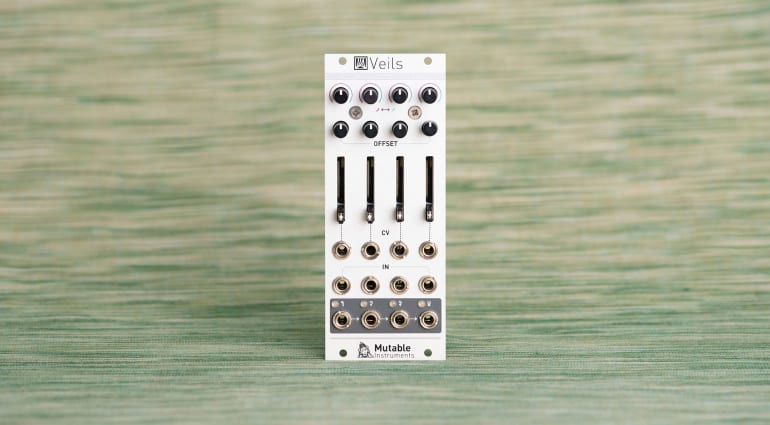 Veils is a classic Quad VCA that appears in almost everyone’s rack. Mutable Instruments has slimmed it down to 10HP to “make room for large(r) releases and gives hope to rumours of the mythical Clouds 2.

Veils does everything right. The original was simple, straight forward and stacked 4 VCAs horizontally into a relatively small space controlled by knobs. The updated version swaps the orientation for vertical and the knobs for sliders and shrinks it down to 10HP. The sliders also contain useful gain indicator LEDs and they’ve added positive offset controls for direct use of bipolar modulation sources.

All of that is cool, interesting and useful because VCAs are always useful and the more you pack into a space the better. However, what’s perhaps more interesting is the reference to “larger” things to come. There was some doubt as to the future of Mutable Instruments when last year product designer Émilie Gillet halted development of the long-awaited sequel to Clouds and appeared to go off to pursue a life of happiness elsewhere. Since then little bits and pieces have emerged from MI, a firmware update there, a redesigned Ripple here and it feels like a bit of momentum is being built. Émilie seems to be finding some joy in Eurorack again and for that, we are eternally grateful.

She always said that she would continue to maintain products and finish things that were already under development. This is something she reinforced in a post on Reddit recently:

Indeed, I no longer do any R&D work for new modules. I continue supervising the production of the existing line of modules (quite some work in such times when many things work differently), providing support, repairing wonky Braids encoders, and working on all the steps necessary to release the modules that have been designed before the end of 2019 (including Clouds’ successor, whose software has been written in spring 2018, and hardware finalized by the end of 2019).

And in that statement lives the words “Clouds’ successor” which will undoubtedly bring joy to many people. While it may have hit the skids last year it looks like we may well see a Clouds 2.
In the meantime Veils 2020 should be available now for £159.