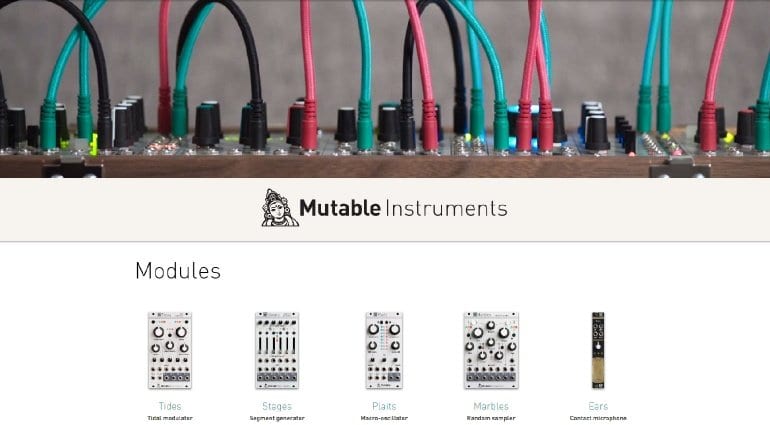 In a conversation over the past couple of weeks on the Mutable Instruments community forum, Émilie Gillet, founder, designer and builder of all MI products shared that, “Nothing is underway. I currently have stopped developing Eurorack modules, not sure when or if I’ll get back to it. There is nothing to read, no teasers, nothing.”

Émilie goes by the handle “pichenettes” on the forum and this post appeared on a thread discussing the successor to the ever-popular and discontinued Clouds module. When pressed about what this means for Clouds 2, Émilie posted a long reply detailing the sometimes painful process of prototyping this module, some of the difficulties she’s encountered along the way, how it’s a very long way from being finished and would probably take another year until release assuming she was still hard at it.

But she’s not. “My work rate is currently zero because there’s a massive feeling of dread surrounding this project,” she says. Émilie goes on to say how the expectations and pressures surrounding this product are huge. There are concerns over the quality of manufacturing, dealers placing preorders of 100 or 200 (which is completely unheard of) and the general anticipation of the community has become overwhelming. And all of this is happening while Émilie is going through a lot of personal issues that few of us could comprehend since changing her name from Olivier back in January.

I find it much harder to enjoy the activity of coding and developing modules. It feels painful because I can’t help thinking how much of it has been a distraction and a coping mechanism for avoiding more serious issues. And in the long run, it doesn’t seem like a sane move to stay in a line of work where absolutely everybody knows my history. I’m starting to get a sense of how much of a difference it makes to interact with people who don’t know about my past, versus people (no matter how accepting, tolerant, woke…) who have been exposed to all the old stuff. Some people are comfortable with being visibly trans, but well, I’m learning that it’s not my cup of tea. Maybe I’m too old for that. I’m waiting to find the next niche I can disappear in.

I find that quite a heartbreaking statement. The forum, Facebook and other social media are filling up with messages of support and love for Émilie and in appreciation of the impact her work has had on the Eurorack and synthesizer communities. Although Émilie is quick to point out that she was talking about the Cloud 2 situation in particular:

By being focused on this situation, it failed to convey that the time not spent working on Clouds 2 is not spent crying in misery. I’m making progress in other areas. Hope, renewal.

Just to make things clear: Marbles is for me a 2015 product. That I’ve stopped developing new modules in 2019 doesn’t mean it’s going to be over tomorrow. Think of a crossfade, or reverb tail, spanning several years.

People. Please. Don't freak out. I'm going to continue producing and selling whatever makes sense to stay in the catalog, and whatever entered the production pipeline earlier in the year. Providing support. Repairing stuff. It's not like the website is going blank tomorrow.

At this point it appears that the amazing journey of Mutable Instruments has come to something of a halt. There is always the possibility that Émilie will be inspired to return to developing fabulous modules to be adored by both hardware and software Eurorack fiddlers. But in the meantime, all of us here at gearnews.com wish her all the best with whatever she finds herself doing in the future. I’m sure the term “Rings into Clouds” will forever haunt you as it will always be part of Eurorack history.

For the full text of her post see the link below.