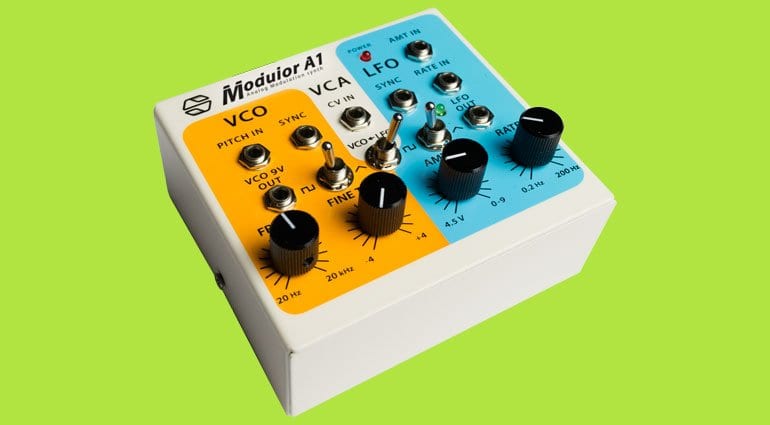 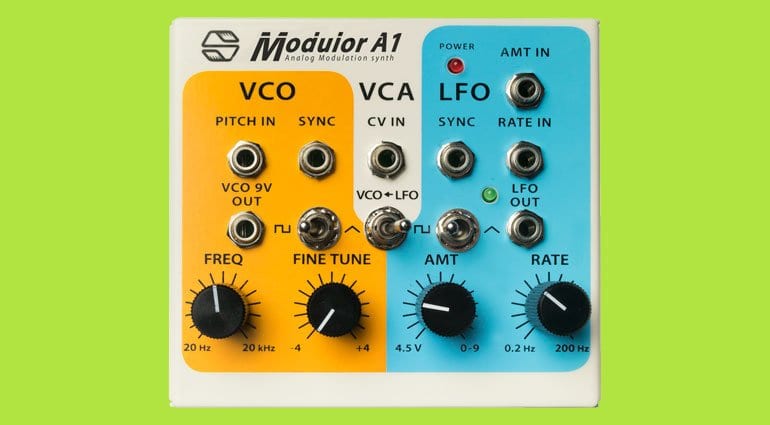 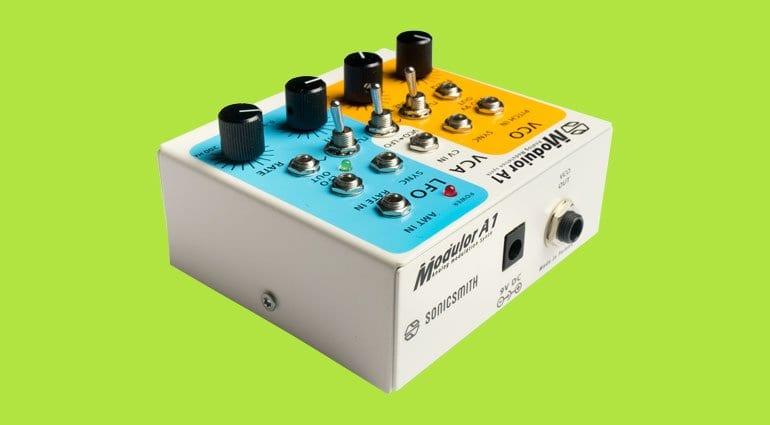 We first came across Sonicsmith at the start of 2017 with their guitar orientated Squaver and Convertor audio controlled synthesizers. They were the only people at Superbooth to bring along a guitar. They have a new box called Modulor A1 and this time it’s a little monosynth that can run off 9V pedal-board power.

I’ve been writing for Gearnews for a couple of years now and I still get depressed by the naming of products. “Modulor” with an “o” rather than an “a” – really? Anyway, this little thing has a single oscillator, switchable between triangle and square waveforms, a two-channel VCA and an LFO. They describe it as a “deep dive into modular synthesis” which it really isn’t. It’s a cool little semi-modular monosynth built into a bomb-proof box with a really fabulous colour scheme – but deep diving modular this is not.

The VCO offers only one output at a time and there’s no pulse width, shaping or sub output. The VCA is wired directly to the VCO and to the LFO and has a single CV input for modulation. The LFO can be triangle or square and can either go to the VCO or out to modulate something else. It can also get up to some interesting FM rates.

So there’s a little bit of modular going, some potential for patching it into a larger Eurorack system, but it’s probably more at home with other patchable desktop synths. There’s no MIDI or onboard triggering device so you’re going to need some existing CV enabled gear to get any sound out of it. It would play really nice with the SynthBlock Mr Hyde and Dr Strangelove from Analogue Solutions, but you’d still need a sequencer like the Korg SQ-1 or a keyboard with CV outputs like the Arturia Keystep. And of course, it makes a great companion to their existing synths. Not sure about having it on the floor in a “pedal environment”.

It looks great, it’s very neat and attractive and the sound demos are nicely impressive. At £209.94 it seems reasonable in terms of sound and build quality. That makes it quite a bit cheaper than the usual semi-modular suspects like the Moog Mother-32, Make Noise 0-Coast and Dreadbox Erebus, but it’s also much simpler. They are not expecting to ship until May next year so we’ll have plenty of time to check out sound examples and videos as they emerge. It does require other gear in order to function, but would be a decent addition to any tabletop synthesist.