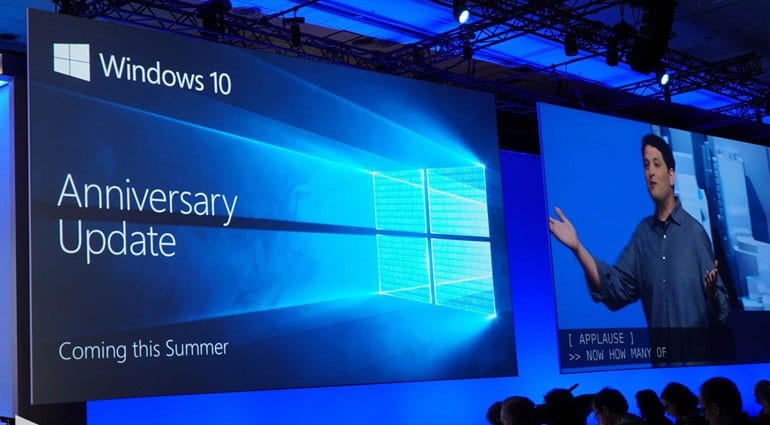 In a blog post this morning Microsoft confirmed the date of the highly anticipated anniversary Windows 10 update. It will be rolling out via Windows Update on the 2nd August, a couple of days on from the actual anniversary of the 29th July. What will it mean for those of us choosing (or finding ourselves with) Windows 10 as our music making platform?

Well, it’s difficult to say, but let’s have a look at the contents of the update.

The Microsoft virtual assistant is going to become more prevalent and useful. She/he/it will be able to operate from behind the lock screen so you can ask questions or get it to play music without unlocking your device. Cortana will also remember things for you, presumably by scanning your emails. Will she be able to pull out that serial number for that old plug-in you need to reinstall, which you can’t remember where you bought it from or with what email address? Or find that lost project on your archive drive that you can’t remember the name of but could hum her the tune? Who knows. Personally I rarely use Cortana other than as a file search. Can’t remember the last time I clicked on the icon.

This is potentially interesting, as touch screens in Windows 10 laptops and tablets are becoming more common. Windows Ink brings in new ways to make that touch experience more useful. If you’ve ever used the Surface with the digital Pen then you’ll know how great this can be. I was totally surprised by the quality of the handwriting recognition to the point where I actually use it regularly without thinking about it. Windows Ink will bring in an instantly accessible sketch and note pad including the old favourite of post-it notes. In the Sketchpad app you’ll have a wide white space in which to doodle. You’ll also get a virtual ruler to help you draw straight lines. Screen Sketch allows you to take a screen shot and then scrawl all over it and save as an image. I can see that being useful in adding notes to projects, or sketching out ideas over the top of an arrangement, or sharing information with a collaborator. It at least has the potential to be useful to the way we work with our computer and our projects. Assuming of course you have a digital pen, although it will also work with fingers. 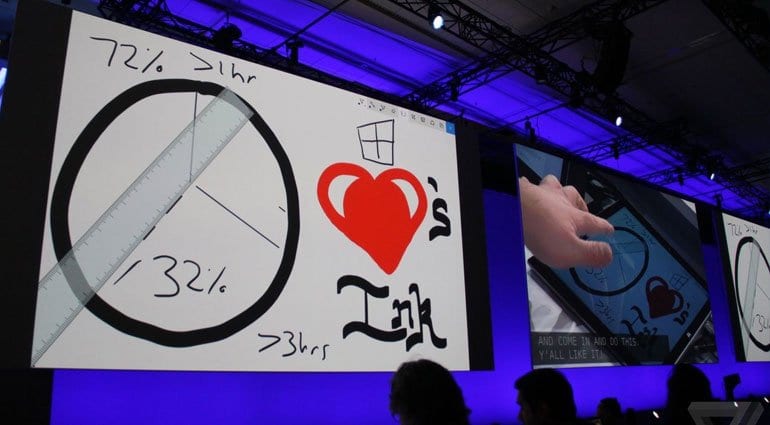 This cockamamie technology allows you to login to your device without a password by smiling at it. It was the single most annoying feature of the Surface Pro 4 and I turned it off about half an hour of trying to like it. However, this also has its fingers in biometric authentication – or fingerprints – which is a lot less trying. In the update they are allowing the new browser, Microsoft Edge, to accept fingerprint authentication for any password or security requests on websites. That’s pretty cool – but please don’t make me smile at my device to make it happen. Edge also receives a bunch of other updates, performance enhancements and extension support.

This is a gaming thing, obviously. It brings in the idea that any game you buy for the Xbox One will also run on Windows 10 – or vice versa. It’s actually a fabulous thing for gamers like myself who never get a chance to play because their kids are always playing on the console. However, it doesn’t mean you can play the game on both a PC and the Xbox at the same time. Also Play Anywhere only applies to downloaded versions which tend to be the most expensive – it won’t work with discounted copies from your local Tesco, although apparently they will be able to sell download codes. Relevance to music making? Well, it means you can play Rock Band on your PC while waiting for a DAW update to download…

Personally, I think Windows 10 has been remarkable. I’ve been running it untweaked for several months on my main studio machine and everything works really well. I just have to turn off notifications to avoid interruptions when making music. The workflow and compatibility is excellent, all the things that used to get in the way with Windows 8 are gone and I love how all my stuff follows me from device to device. As computer musicians we tend to be naturally adverse to updates. We get our systems just right and fear the arrival of an update that’ll trash everything like it does on Apple. With Windows 10 that doesn’t seem to have been an issue so far. In fact quite the opposite, each update seems to bring improvements to all sorts of areas. I have experienced some trouble with updates on my Surface Pro 4 but any strange behaviour is usually fixed with a reboot. If you are uncertain about upgrading then by all means stick with Windows 7, however, if you have a fairly recent PC then I’d recommend upgrading. Back up your original system first so you can always go back. You’ve got 30 days to take advantage of the free upgrade, after that you’ll be looking at around £100.

07 Mar · Yeah I guarantee for every person using the site and claiming not to have a problem with the name, there are 10 other people who never signed up and would never sign up due to the name. Then another ...