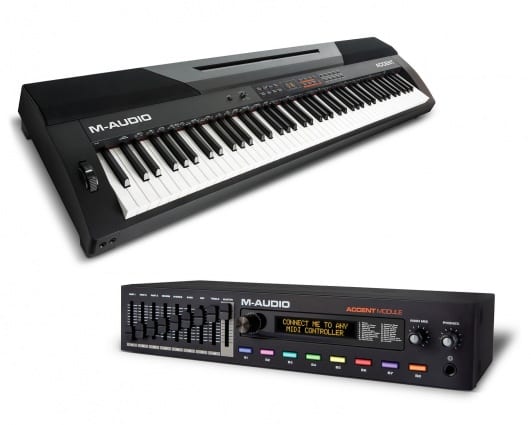 You don’t automatically associate M-Audio with hammer action keybeds and piano sounds, although their Oxygen 88 piano-style MIDI controller has been around for quite some time. It’s not too much of a reach, then, for them to integrate a sampled piano engine into the Oxygen 88 form factor and so we have the M-Audio Accent. It comes with 20 built-in piano sounds covering the usual Grand, Electric and Organ sounds including Steinway piano samples from AIR Music Technology. The press release says that you can layer 3 voices simultaneously, whereas the feature list believes it to be 2 voices. It then talks about 50 piano accompaniment styles for solo performance situations. I’m not entirely sure if these are played piano patterns or a band-style accompaniment – when it lists Slow Rock and Jazz Pub as styles it does make you think electric keyboard style auto-accompaniment. I’m sure these things will become clear once we’ve had a go on one. Other features include a lesson mode where you can divide the keyboard into two areas with the same pitch and voice, built-in DSP effects, transpose and metronome. There’s two headphone outputs and a very useful auxiliary input. At 389.99 GBP it’s extremely affordable.

They’ve also released it as a module. Piano modules have been very thin on the ground since laptops and the iPad were able to offer similar sounds for much less, but in the virtual sounds we lost the immediacy and convenience of a proper hardware box. 2016 sees a welcome return of the piano sound module. The Accent Module only lacks the confusing accompaniment patterns and the on-board DSP but otherwise houses the same 20 voices and AIR Steinway samples. With a clear and simple display, some knobs and sliders it’s a simple box of pianos and at 179.99 GBP it’s at a tempting price point for anyone needing to attach some instant piano to their MIDI controller.