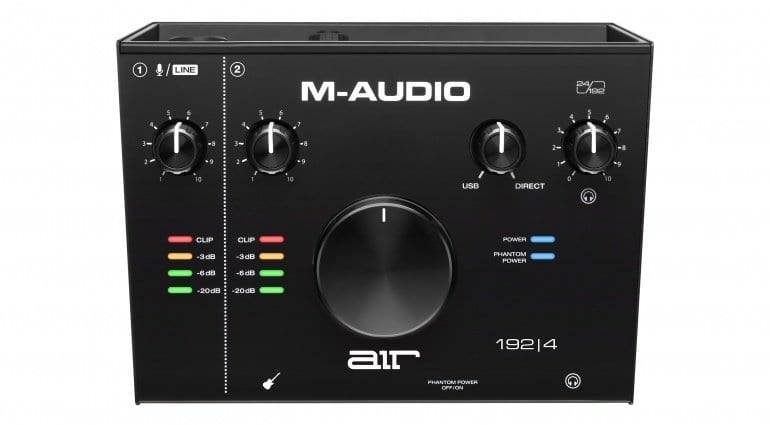 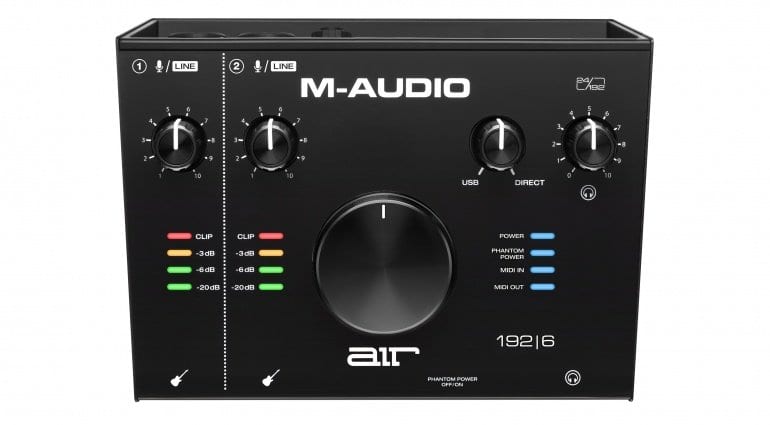 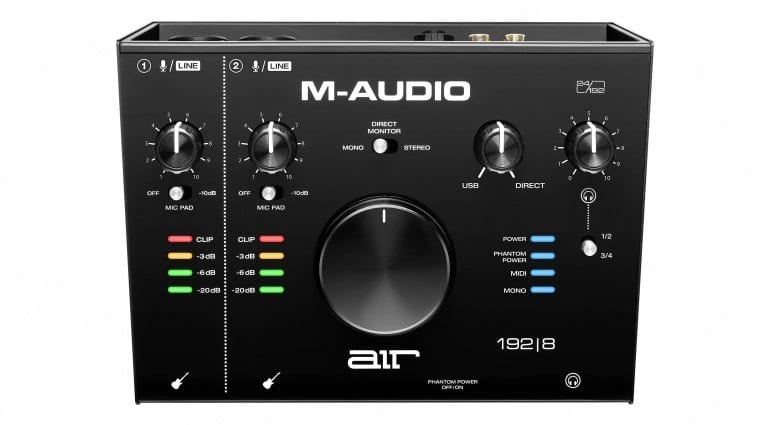 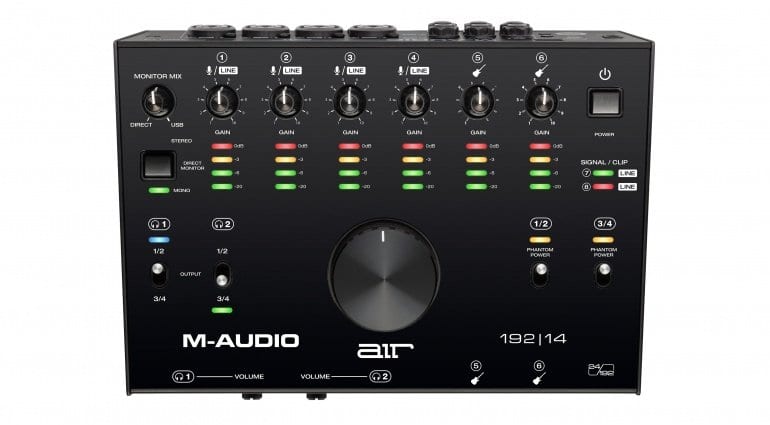 M-Audio has unveiled the AIR series USB audio interfaces. The series consists of four recording interfaces and the AIR Hub, which is a monitoring interface and USB hub. Which one is right for you: the AIR 192|4, AIR 192|6, AIR 192|8, AIR 192|14, or the AIR Hub?

All of the four new M-Audio AIR recording interfaces, the AIR 192|4, AIR 192|6, AIR 192|8 and AIR 192|14, record at a resolution of up to 24 bit/192 kHz. M-Audio says that the high-speed USB circuitry enables a round-trip latency of 2.59 milliseconds. For latency-free monitoring, all four interfaces have USB/direct blend knobs on the front panel.

The most prominent feature is the large metal volume knob in the center, which is reminiscent of monitor controllers like the Mackie Big Knob, Behringer CONTROL2USB or Audient Nero. The enclosures are also made of metal, which should give the M-Audio AIR series interfaces a solid feel on your desk. All interfaces have USB-C connectors and come with cables that connect to USB-C or USB-A on the computer side.

The interfaces are distinguished by the number of available inputs and outputs. The AIR 192|4 offers two analog inputs, one of which has an XLR-1/4″ combo jack with a Crystal preamp and phantom power. The other input is a 1/4″ instrument input. On the output side, the 192|4 offers a 1/4″ stereo output and a headphone output with separate volume control. This is the interface for you if all you need to record at the same time is a microphone and a guitar. Recording stereo sources like synths would be cumbersome because one of the inputs is at the back and the other at the front of the interface, and gain-matching them would be tedious due to the different kinds of inputs.

The AIR 192|4 is also available as part of the AIR 192|4 Vocal Studio Pro bundle, which adds a pair of HDH40 headphones, a Nova Black condenser mic, and a microphone cable. This will likely replace the company’s previous entry-level recording bundle, the M-Track 2×2 Vocal Studio Pro. 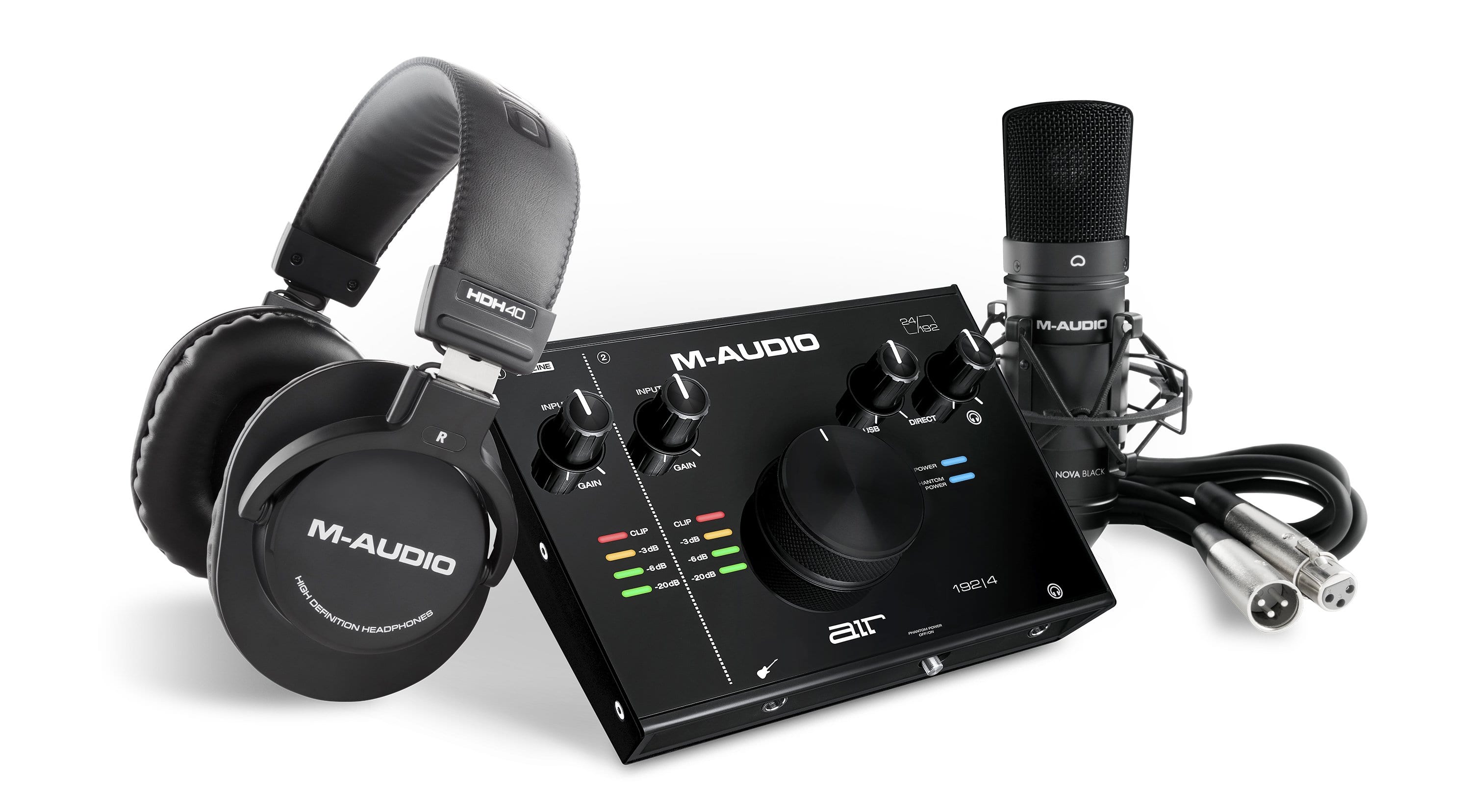 The AIR 192|6 doesn’t have more channels of simultaneous recording, but it does add a second mic preamp and a second instrument input. For each of the two analog recording channels, you can either connect a microphone or an instrument. The XLR-1/4″ combo inputs with preamps are at the back, while the instrument inputs are at the front. The fact that there are two of each kind of input also makes it easier to record stereo sources. Output-wise, this interface is the same as the AIR 192|4: Stereo 1/4″ outputs and a headphone jack with independent volume. Oh, and this one also has MIDI In/Out.

The AIR 192|8 has the same inputs as the 192|6: Two channels of recording, for each of which you can choose from a mic/line XLR-1/4″ input and an instrument jack. The mic inputs come equipped with 10 dB pad switches, which the 192|6 doesn’t have. This interface adds two additional output channels in the form of a pair of RCA connectors. The stereo aux output is also available in  RCA format, which makes me think that M-Audio is targeting the DJ crowd with this one. The AIR 192|8 has its MIDI In/Out on 1/8″ jacks, in contrast to the DIN jacks on the 192|6.

The largest of the bunch, the AIR 192|14, looks decidedly different. With eight channels of simultaneous recording, this one is the right choice for recording drums or your band’s next living room session. It offers four mic/line inputs with preamps, two instrument inputs and one stereo line input, all of which can be used at the same time. In addition to the main stereo output, the 192|14 has a second pair of 1/4″ outputs and two headphone jacks with independent volume controls.

The AIR Hub follows in the footsteps of the M-Track Hub. It doesn’t record. It’s simply a way to get a stereo audio stream out of your computer in 24 bit/96 kHz quality, controlled by the same large metal volume knob that you get on the AIR interfaces. There’s a pair of 1/4″ outputs at the back to connect your monitor speakers, and a headphone jack.

So why is it called “hub”, you ask? Well, M-Audio has included three USB-A connectors, which was already a great idea when the M-Track Hub came out. It lets you connect your USB controller keyboard, tablet or synth, and USB thumb drive all at once, using up only one USB-C connector on your computer. That’s especially nice if your computer doesn’t have USB-A ports anymore, like many current Macs. If you make tracks “in the box”, the AIR Hub could be all you need. 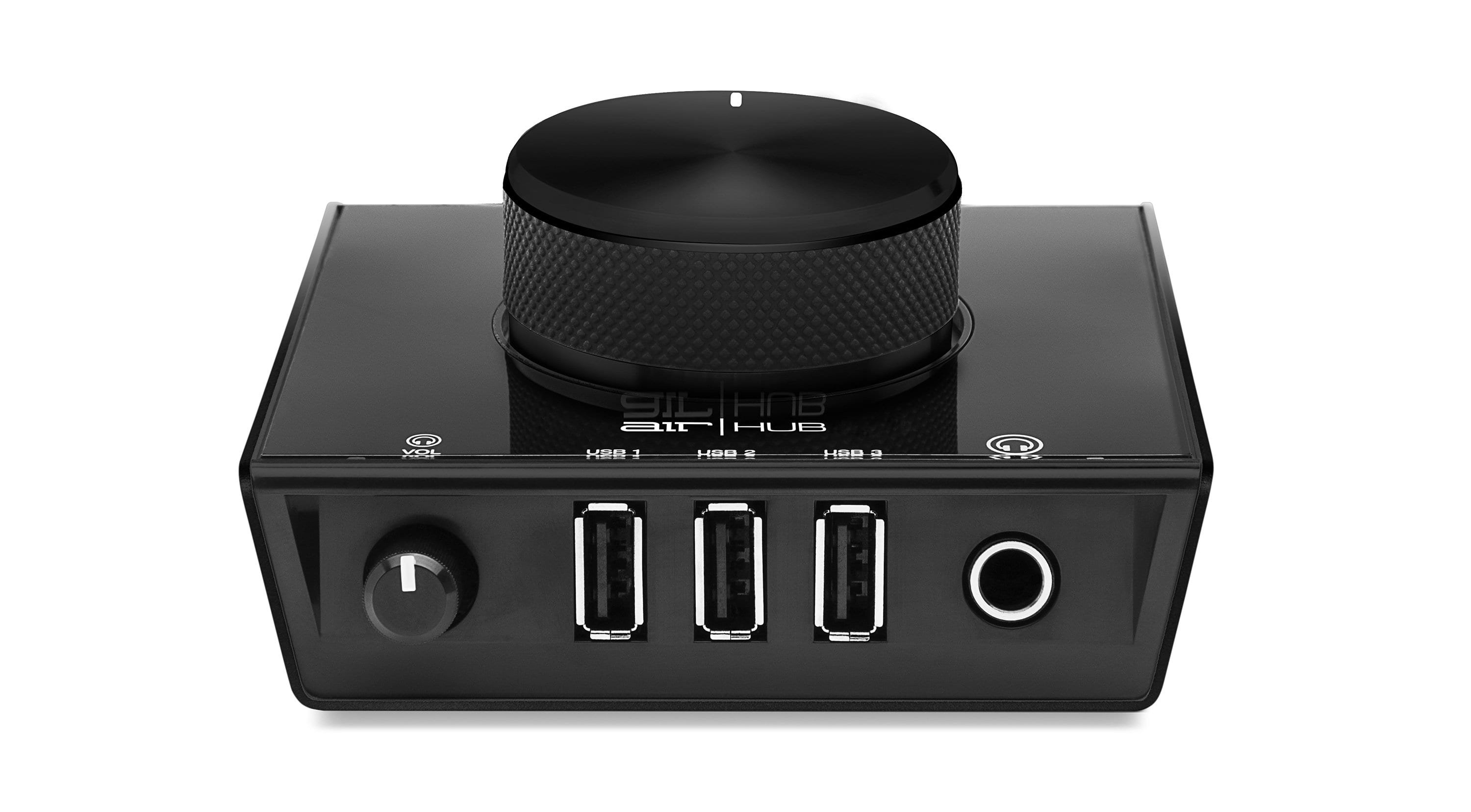 The Air Hub has 3 USB-A ports for your devices

Like all M-Audio interfaces, the AIR series comes with a nice software package. You get not one, but two DAWs: Pro Tools|First M-Audio Edition and Ableton Live Lite. The bundle also contains the Avid Effects Collection, various synths by AIRMusicTech and 2 GB of TouchLoops content.

According to M-Audio, the AIR series interfaces will be available in Q4 of 2019. The prices are as follows:

Guest
The converters are all terribly underspecified exc

The converters are all terribly underspecified except for the 14.

MOD Devices to launch Kickstarter for Dwarf, a "no limitations" multi-effects box

28 Jan · I know Rob personally, so I'm not getting involved.