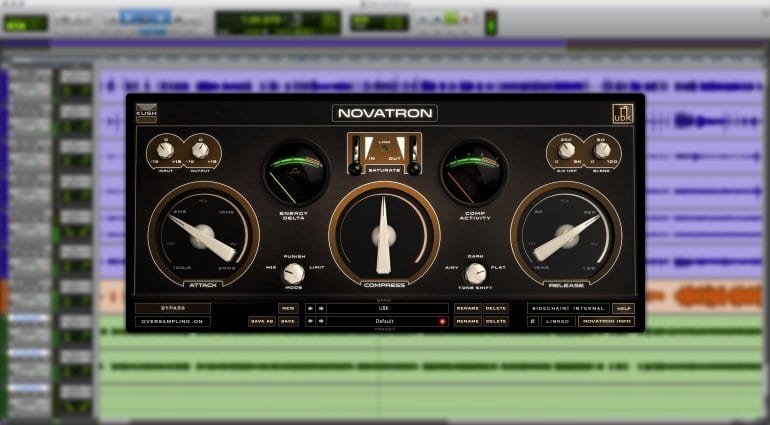 Novatron is a vintage-type compressor chameleon with an abundance of chicken head potentiometers.  ·  Source: Kush Audio

Fact: you can’t stick to a single compressor for the rest of your life. Even if they all do the same thing – control dynamics – they always do it a little different, often with a surprisingly pleasant and musical result. That’s why the world can’t possibly have enough compressors and Novatron’s entry into the field is certainly to be appreciated!

Fashioned by Kush Audio, Novatron is an analogue-modeled Varitone Tube Compressor. It features a vintage-inspired interface and an appropriately “warm” sound for an overall laid-back, classic vibe. Novatron is not an emulation of one particular unit. Rather, it’s a mish-mash of several classic hardware models, borrowing from their designs in the attempt of accomplishing a rich sonic signature.

As parts of its interface and inner workings, Novatron features separate input and output transformer saturation circuits, two optional Tone circuits, and a compressor with groundbreaking attack and release characteristics. This way, it presents a variety of colors and styles to experiment with. Go for a classic sound envisioned in your head, or come up with something new and unexpectedly cool.

Kush Audio is particularly proud with “painstakingly” modelling the first 100 microseconds of the compressor’s transient response According to the developers, this results in a particular tonal smoothing with a distinct analog character. Novatron is thus a capable “character” compressor to try out on any instrument or vocal in need of a shake-up.

Novatron is available in VST, AU, and AAX formats for Windows and Mac computers. The compressor is being sold for $149. Kush Audio also offers a subscription model, similar to Steven Slate, Eventide, and Softube. Prices start at $10 per month for access to every Kush Audio plug-in.

One response to “Kush Audio Novatron: a varitone tube compressor with a variety of sounds”