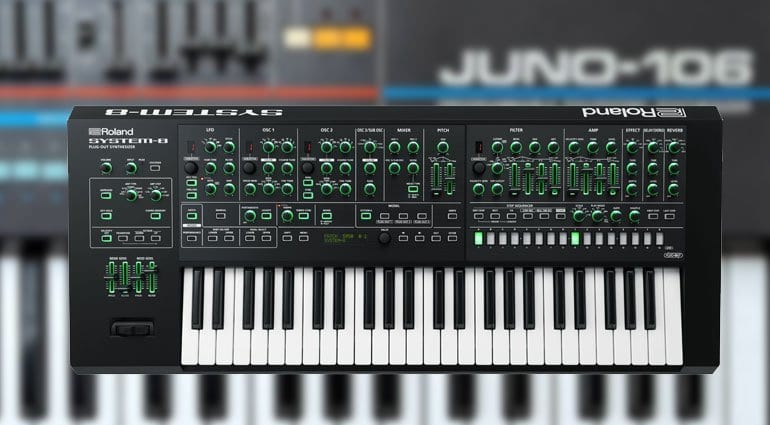 The long-promised Juno 106 plug-out emulation for the Roland System-8 synthesizer is finally here, and it’s early. Originally scheduled for 2017, it’s arrived in the 1.11 software update to the System-8 released today. It joins the Jupiter-8 plug-out that was available at launch.

I’m not fond of the term “plug-out” but I guess it somehow works in describing the transformation of a hardware synth into another hardware synth by tinkering with the software. No, I’m not sure about that. The Juno-106 can be found on the PLUG-OUT 2 button once you’ve done a factory reset after applying the update.

The Juno-106 plug-out has all the original features of the original. According to “Repair” from Toronto in the video below, everything from the noise in the chorus to the pulse width modulation is spot on. For gigging electronic musicians they ask why would you carry a Juno-106 and a Jupiter-8 to the gig. All you need is the System-8 and you have three great synths ready to go.

Other improvements include the addition of a filter from the System-1 and a mode for saving the tempo in patches. Incidentally, Roland say that the System-1 doesn’t have the processing power to handle the Juno or Jupiter Plug-outs, which is a shame. Also, the promised compatibility of the System-1 plug-outs with the System-8 is still yet to materialise.

System-8 owners can download the update for their system from the Roland downloads page.

Keep sending me this updates