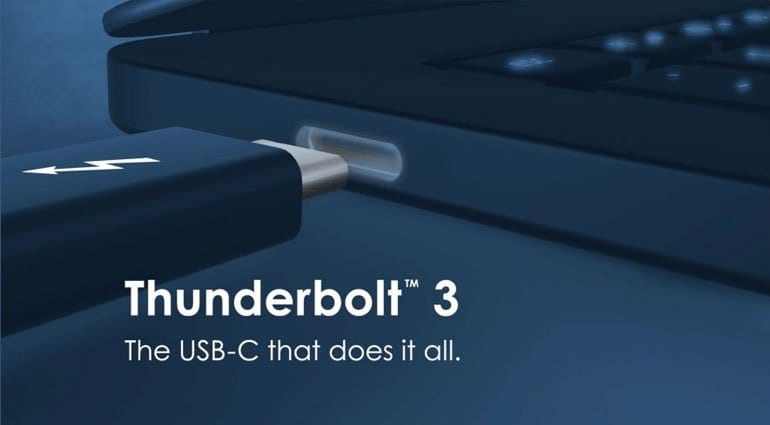 Intel has announced that their Thunderbolt 3 protocol is going to be everywhere whether we like it or not.

It’s almost as if Intel have gone “oh, sod it!” in response to the lack of Thunderbolt 3 in all Microsoft’s premium Surface products. Last week Microsoft announced the latest Surface Pro hybrid tablet/laptop, just a few weeks after the all-new Surface Laptop. Both these products sported regular USB 3.0 ports. Of course, the internet lit up decrying the lack of Thunderbolt 3 or USB 3.1 ports.

Intel’s solution is to bake Thunderbolt 3 into the CPU and make the specification royalty-free. That’ll do it!

So why haven’t Microsoft adopted this future looking technology already?

The first problem with Thunderbolt 3 (TB3) is that it’s expensive to implement and the user experience has been poor. As an example, to add TB3 to a system based on a TB3 compatible Asus motherboard you have to buy a TB3 expansion card. That’ll cost you the best part of 90 quid. The installation of the card is then a headache in of itself and Windows doesn’t appear to acknowledge the existence of the port until you plug a TB3 device into it. It’s a mess – it works, but it’s a mess.

Then you have the confusion over the USB-C port and whether that’s USB 3.1, which many motherboards and computers now have, or TB3 which most don’t. The idea of having a single type of port on your computer is awesome but it only works if we have confidence in what it’s supposed to do and work with.

And that brings me to the other problem – the lack of TB3 devices. When Apple went exclusively over the USB-C port (this is the port that USB 3.1 and TB3 use) the first USB-C devices on the market were adapters to convert back to regular Thunderbolt or USB. Things are starting to change, but there are decades worth of USB devices out there that really do need to continue working.

I did a round-up of current Thunderbolt adorned audio interfaces to find out what Thunderbolt connection they were using:

All of these will work with TB3 with an adapter, so the functionality is not in question, it just that there doesn’t seem to be a whole lot you can plug into these demanded USB-C ports.

And this is exactly what’s behind Intel’s drive for “Thunderbolt 3 Everywhere”. If it’s expensive to implement and requires added PCB and technology squeezed into these super thin premium laptops then it’s unlikely to become ubiquitous. To make it the standard they want it to be it has to be baked into the CPU and the protocol specification has to be made available for free. That’s what Intel have done.

Intel have been working with Apple on it for some time. Last year’s MacBook Pro’s were the first to come with only TB3 ports. But TB3 devices remain scarce and it remains a premium option, like FireWire before it. They’ve also been working with Microsoft and there’s been a lot of improvements to Thunderbolt 3 support in Windows. However, Microsoft’s decision not to include TB3 in the new Surface Laptop and Surface Pro makes complete sense if they know that Intel are going to bake it into the next generation. Why fork out for it now? Why try to force the technology inside the fabulous lines of their laptop when they won’t need to do it with the next one? Very shrewd.

In the meantime, Microsoft just has to put up with a moaning internet while we all quietly get on with plugging all our existing gear into it quite happily. Meanwhile, the rest of the industry can focus on creating more and better TB3 products so that when they do make the move there’ll be a world of devices ready to go.

Intel have done an awesome thing. It’s the only way forward. And personally, I’m happy to carry on with USB for a couple more years until everything evolves into Thunderbolt 3.