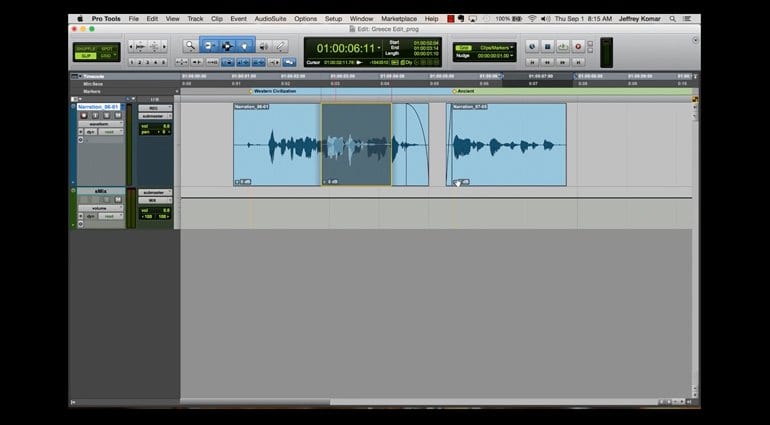 Avid have announced the Pro Tools update 12.6 at IBC 2016. It will be available later this month. The new version introduces some new features, including improved editing and recording tools through to new ‘Clip Effects’ for Pro Tools HD. However, it’s the un-bundling of HD software and hardware under Pro Tools 12.6, which is the surprise.

The major new feature in Pro Tools 12.6 is ‘Clip Effects’. This opens up a new section in the tool bar of the edit window where the universe display is found. Here, a landscape version of the Avid channel strip is shown for applying filtering and dynamic adjustments for individual or multiple clips on the timeline. These settings are associated with clips (regions) but aren’t rendered, unlike Pro Tools AudioSuite.

There are a couple of restrictions however, such as the processing available is only Avid’s Channel Strip. In spite of that, this still looks like a very powerful tool – and the Channel Strip is a very good plugin. The biggest restriction though, is that only Pro Tools HD users will benefit from this feature. That might potentially be disappointing to Pro Tools ‘Vanilla’ users, but it is very much a post production workflow-style of tool. If this tool sounds like it would be useful to your own workflow, and you’re not a HD user, see the Pro Tools HD software-only option below that’s now available! Another HD-only upgrade, again for the post production facilities, to keep single-system re-recorder workflows in sync and glitch free.

For all Pro Tools users there are a number of editing enhancements. This is great news, hopefully retaining Pro Tools’ reputation as one of the best applications for audio editing. The new enhancements include a clearer editing overlay view (as seen above) and new warnings when overlaid clips could be destructive. To avoid destructive editing and recording, Pro Tools 12.6 can now be set to automatically create new playlists, which is a feature I’ve been waiting for. The smart tool has also been improved to edit the shape of fades directly on the edit window without needing a double-click. I look forward to getting in the habit of using these new features – presumably saving me time, especially on tracking sessions.

Yes, you assumed correctly. You can now purchase a Pro Tools HD license separately, if it’s only the software features you need rather than the currently bundled hardware. This marks a significant change to the world of Pro Tools HD, which has always required the marriage of their own hardware and software to perform, even back in the days of Digidesign.

The un-bundling of software and hardware also works the other way round, permitting the purchase of the hardware separately to the software. This will allow users to build custom systems with Avid’s own, or third party hardware in conjunction with multiples of HD Native or HDX cards.

Now, many Pro Tools users can perhaps afford to use the HD software without the cost of the hardware at the same time. This is opening up the playing field for freelancers and small facilities, who might have otherwise been faced with a significant cost to move to Pro Tools HD, or to get by without. Pro Tools HD software isn’t going to come cheap however, which clearly demonstrates Avid’s intentions to retain the two-tier software versions. As with anything Avid, there are several price options available, and some of these are being reviewed along with the 12.6 update. For example, if you were to buy a new perpetual license for Pro Tools HD software only, it will be 2499 USD. This might seem expensive, but is in fact a lot cheaper than currently buying a HD Native card, HD Omni interface and the HD software, which sets you back around 5000 USD.

There isn’t any information on Avid’s site about 12.6 just yet, but with the update expected some time this month, keep an eye on their website. Any current Pro Tools users with an update plan should expect a notification in their Avid Application Manager, or in their Avid account soon. As part of the update, a change will be made to your iLok license at the same time.

Oh, and remember to always backup your system and your work before attempting any updates!

Taken directly from Avid’s YouTube channel, here’s a brief video they’ve made introducing some of the new features coming in v12.6.