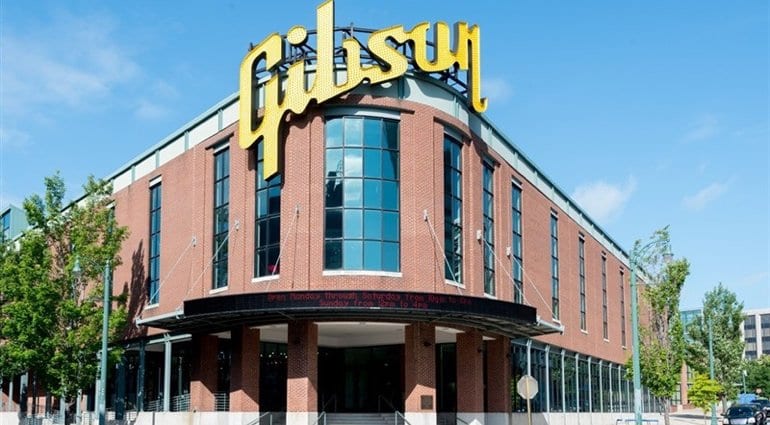 The big news in the guitar world today is – once again – Gibson related. This time the US guitar giant is selling its famous Memphis factory, apparently under pressure to downsize. They have only had the site for 18 years and so this is a bit of a shock to many in the industry. It points to some of Gibson’s rumoured financial issues.

According to the Memphis Daily News newspaper, the US guitar company is selling its famous Memphis guitar factory located on nearly six acres at 145 Lt. George W. Lee Ave.

Their Memphis factory is used to produce Gibson’s semi-hollow and hollow body instruments, so this is quite a big deal and points towards the company being in some financial difficulties, as we reported last year.

The Memphis factory measures 127,620 square feet and also contains a large entertainment venue and has a 330-space parking lot. Gibson has it on the market for  $17 million and as it is a lot of prime real estate, this is actually a bit of a bargain, especially considering its heritage and history. The Gibson Beale Street Showcase and Guitar Factory are synonymous with the Gibson brand.

“We continue to love the Memphis community and hope to be a key contributor to its future when we move nearby to a more appropriate location for our manufacturing-based business, allowing the world the benefit of our great American craftsmen,” Gibson CEO Henry Juszkiewicz said.

“We are extremely excited about this next phase of growth that we believe will benefit both our employees, and the Memphis community.  I remember when our property had abandoned buildings, and Beale Street was in decline.

“It is with great pride that I can see the development of this area with a basketball arena, hotels, and a resurgent pride in the musical heritage of the great city of Memphis.

This would be great news for the area and of course all the Gibson employees at the factory.

For more of our Gibson articles check here

This is not a good sign and unfortunately, Henry is to blame for his poor business decisions.

I personally feel he is not doing the Gibson brand any favours with his erratic business choices, he thinks he is an innovator but he is far from that in reality.

I bet in a year or two the news will be: “Gibson brand sold to Cort”. And then they will put the Gibson logo all over their 150$ guitars…
Sad to say but reality is that guitars are not selling anymore because kids don’t play rock anymore.

I hope I could go there when I have the chance! loved their guitars specially the Gibson 2017 SG Fusion Electric Guitar, i love the well-crafted design 🙂

Yea, thats the ticket, dump the facility thats not making junk. Another brilliant decision. Is the the board of directors so limp wristed thet wont do anything or so stupid they dont know? Who holds the controlling share? They need thier ass beat as bad as Henwy. YO, HENRY…HAVE SOME CLASS AND STEP DOWN. YOU HAVE NO BUSINESS IN THIS BUSINESS!

What rock did you live under this last year? Henry’s not been running the business for months now…