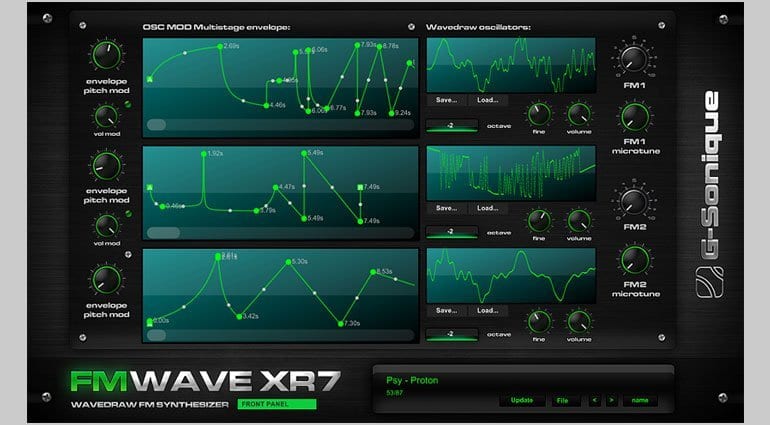 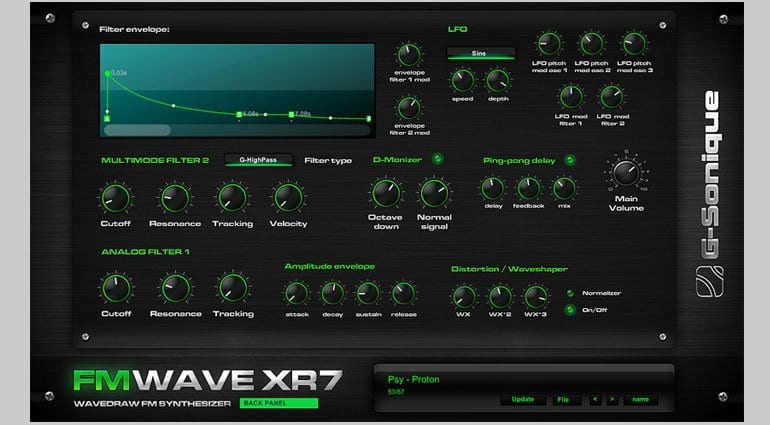 G-Sonique have managed to pull something new into the world of FM synthesis. FM Wave XR7 is an FM synthesizer that lets you draw in your own waveforms.

On the “Front” panel of the XR7 you have 3 multi-stage envelopes and 3 real-time wavedrawing oscillators. The envelopes can control the pitch and/or the volume of each oscillator. You can load in different waveforms or simply draw something really shaky with a mouse. To be honest it’s not entirely clear as to what is doing what. In FM synthesis waveforms are known as operators and they interact and modulate each other in order to produce FM synthesis. I don’t really know what’s supposed to be modulating what. There’s no manual, no video tutorial, no tool-tips as you hover your mouse and so you’re left to sort of fiddle around not really knowing how anything fits together.

The presets, on the other hand, are great. Very nostalgic and cool in a terrible late 80’s kind of way. It’s easy to mess them up by scribbling in the oscillator window. And because drawing waveforms is a bit slap-dash to say the least I always seem to end up back at a similar sort of FM sounding place. I mean there are two FM knobs which apparently are “modulation and micromodulation” but to what and from where exactly?

Other features include an analogue modelled low pass filter, a virtual analogue multi-mode filter with envelope and an LFO for regular modulation. There’s a D-Monizer, which they say is a new concept of synth sound effect, but in the demo version one of the two knobs in inaccessible and other “octave” knob seems to introduce lower harmonics. It’s not exactly blowing me away.

G-Sonique might have created an awesome FM synth with new sound making possibilities, but who’s going to know if they can’t show you how it works? Maybe I’m just supposed to know? Surely it’s worth G-Sonique putting in a little bit of time to explain their virtual instrument with more than some website copy and list of features. Don’t any of these other news sites that reprint website copy ever try out the products they’re promoting?

If you can work it out then FM Wave XR7 is available now for €24.90 for the first hundred customers – so I don’t imagine the price will be going up for some time. More information on the G-Sonique website. 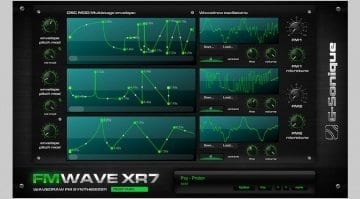 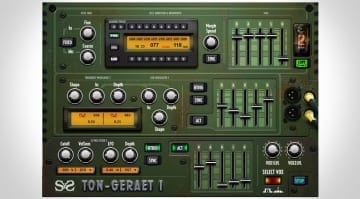 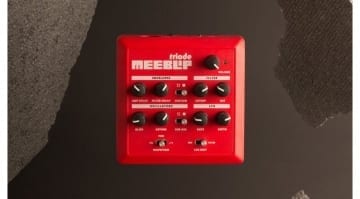