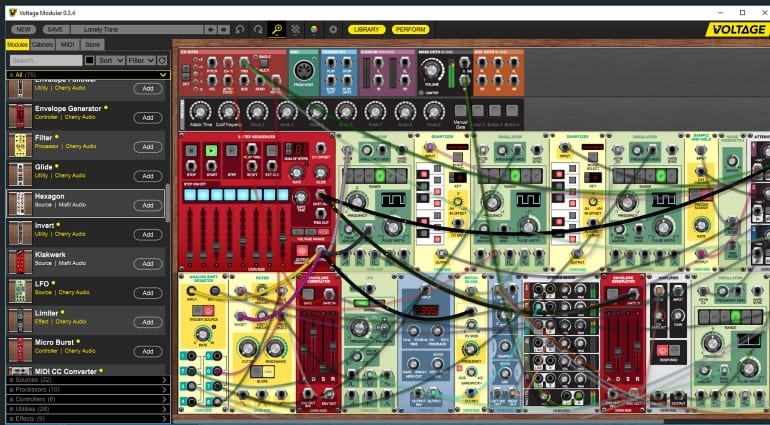 We first saw Cherry Audio’s Voltage Modular at NAMM at the beginning of the year after which it seemed to vanish. They’ve now emerged from some serious development and have released a closed Beta to a group of people including yours truly. So here are my first thoughts on this new player in the virtual modular arena.

It’s designed to be a modular synthesis system for your computer. It’s very much in a Eurorack style and comes with a library of modules to get you patching some sounds together. There are 60 standard modules covering the usual suspects such as oscillators, filters, LFOs and envelopes. But there’s also a Quantizer, Burst generator, Arpeggiator and a whole stack of utilities to keep you busy. One interesting module is the Polyphonic Oscillator which moves you into areas away from the commonly monophonic modular space.

In the beta test version they’ve included 15 “Electro Drums” modules from Misfit Audio which includes an 8 channel drum computer in an 808 style. That collection by itself is completely awesome and could easily be a self-contained bit of drum machine software. 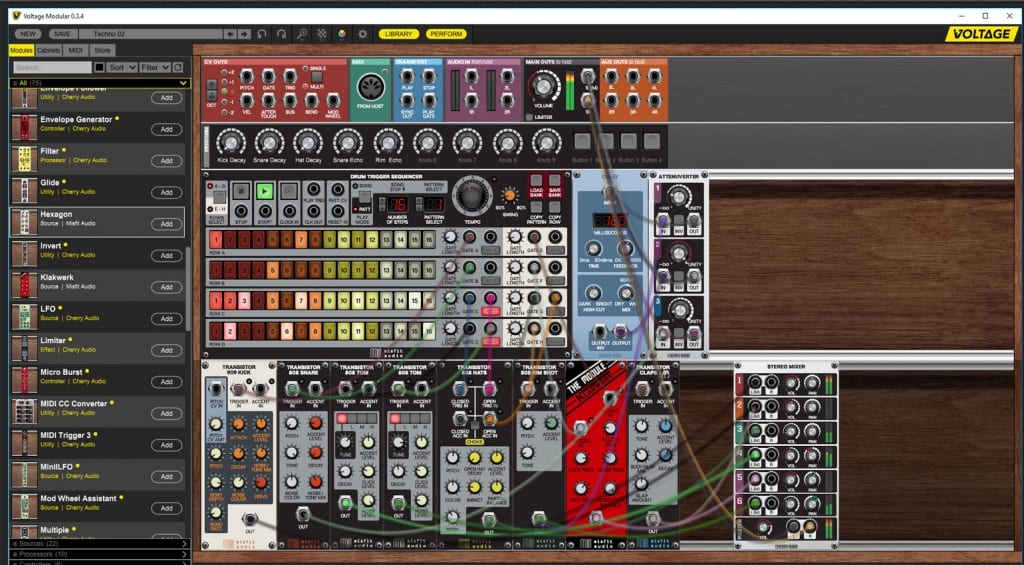 The look is very bright and colourful. It leans more towards Reason in style than it does Softube Modular. The cables are thick and nicely animated as you drag them from socket to socket. In fact, fabulous little dots of data flow down them as you play to show you the direction of travel. Modules can be easily rearranged, taking all the cabling with them, and as far as I can tell you can just keep on adding them. You can scale the interface up to 150% and down to 30%  for either getting close to the action or pulling back to a massive overview. It looks great throughout.

On my first go I ran into problems with the stand-alone audio engine. On Windows there only seem to be options for Windows Audio and DirectSound. Neither of these wanted to play nicely with my USB Audio Interface and the whole thing ground to a halt. I am mystified as to why there’s no ASIO option. Non-ASIO Windows drivers can work well, but not as consistently as good old-fashioned ASIO. Moving to the plug-in version within a DAW and everything started working nicely.

There’s a load of presets to get you moving, the majority were expecting an input from a MIDI keyboard or your sequencer. This was a little unexpected as modular has tended to minimise the role of the MIDI keyboard. It seems that Cherry Audio is perhaps emphasising the more traditionally musical possibilities of Voltage Modular. I guess that also feeds into the use of the polyphonic oscillator.

On the whole Voltage Modular is hitting all the right notes, ticking all the right boxes and is a familiar place for any modular tinkerer to play. It’s also a perfect place to learn about synthesis without the expense of hardware. We don’t yet have a price although it does have its own inbuilt store where you’ll find an Additive Oscillator for $35 and a Vocoder for $25. That places it around the price level of Software Modular, but we will see.

So far so good

I’ve found Voltage Modular to be fun, fruity, full of colour and character and sounding fabulous. This is still early days and there’s plenty of room for development and tweaking, but it’s looking pretty solid so far.