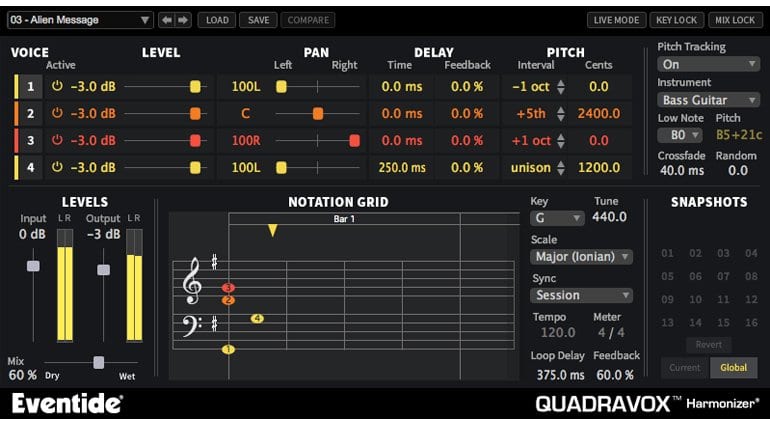 When it comes to delays and special effects, we all probably regard Eventide as one of the leading names in the business. Some of their original hardware units, which are now considered classic gear, were responsible for pioneering studio and live effect processing. Quadravox is their latest plug-in release, offering a new harmonizing style of effect. This looks quite exciting to me, but I wonder how often you would realistically use it?!

Quadravox isn’t another hardware emulation, but in fact a brand new and rather cool effect. Hopefully it will have some of the Eventide DNA and their characteristic sound. Most significantly for me, however, it sounds really modern and unique, judging by the examples in the video below.

So what is Quadravox? Eventide describe it as “a four-voice, diatonic pitch shifter plug-in”. This in itself doesn’t sound particularly new, but I think there are several features which add up to make this plug-in unique. It includes Eventide-style delays, detuning processing, and panning along with a notation grid. This implies the obvious composition usability, but also adds a degree of sequencing and programming to the effect.

It might not be an everyday plug-in, but certainly one that I can see being really fruitful on occasions. It appears to me an effect you would compose with, rather than one you would regularly slip into the mix. That said, there might be some subtle presets that will add width and colour to a mix. At least they have priced it sensibly, almost as a reflection of the fact that you might not use it regularly.

Eventide are releasing Quadravox with an introductory offer until the end of October 2016. If you buy it today it will cost 49 USD, whereas the regular price will become double that at 99 USD. I think these are both good prices for a plug-in from such an established brand. For more information, check out the new product page on Eventide’s website.

Here’s a very simple, but ideal video Eventide have published on their YouTube channel. It demonstrates several of the Quadravox presets with a variety of sources, allowing you to quickly appreciate it’s potential uses.