Epiphone has announced its John Lee Hooker 100th Anniversary Zephyr model. This guitar had been keenly anticipated for quite some time. Its release is now nigh…

John Lee Hooker’s 1961 ‘Zephyr’ is a famous instrument in the guitar world. Epiphone has finally got around to (re-)releasing it. It’s been at least 50 years since Epiphone has made this particular guitar, so its release is more than welcome. It’s also fitting that they attached Mr Hooker’s name to it, 2018 marking what would have been JLH’s 100th birthday.

John Lee Hooker’s original Zephyr was one of only 13 made in 1961, so you can see these guitars are hard to find. After all, Epiphone didn’t exactly make these by the thousand. This new release is limited to 1000 guitars worldwide. All come with a certificate of authenticity. 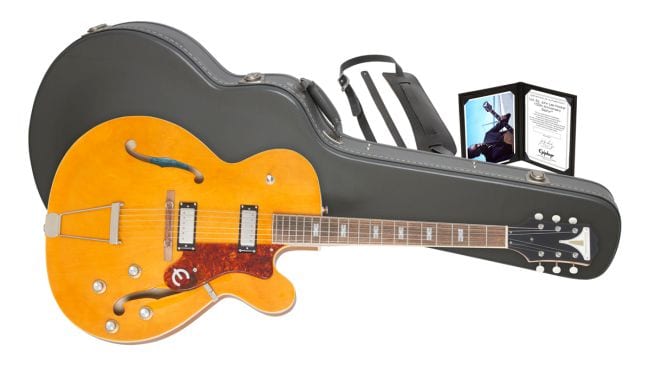 The new Zephyr has a maple top. The body has an Antique Natural finish while Pau Ferro is used for the fretboard, which also has with Pearloid inlays and a vintage split-block design. Pau Ferro is also used for the floating bridge. The guitar comes loaded with new ProBucker mini-humbuckers, a vintage-style trapeze tailpiece and Wilkinson Deluxe machine heads.

I really like this guitar and it comes in at a very reasonable price, considering it includes a vintage-style hard case with a leather strap.