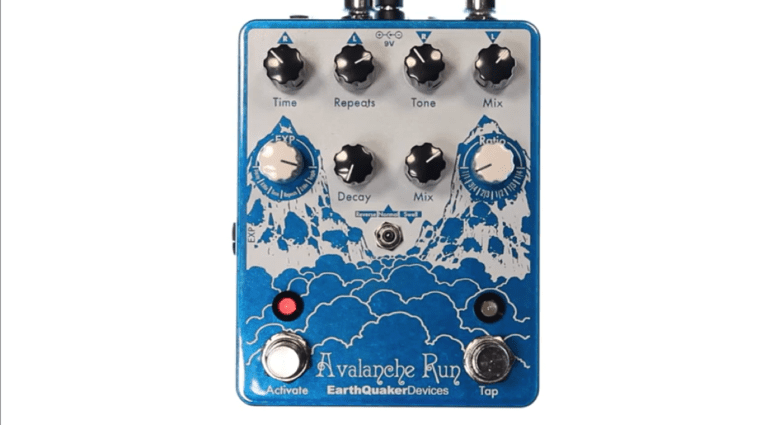 Earthquakes Devices mentioned earlier this year that they had been working on a new more powerful DSP chip for an effect pedal, but at the time I only had a little bit of information. The Avalanche Run delay and reverb represents the fruits of this labour.

The pedal has some similarities with the Dispatch Master and also the Aftermath pedals by Earthquaker, just with more power and up to two seconds of delay time on hand. This new DSP chip they have been working with appears to give the pedal far more power. It has stereo inputs and outputs via jack and so should be a very flexible pedal for those that like to experiment with delays in stereo setups or those of us that like to have huge stereo sound in our recordings.

This effect also has tap tempo with sub divisions and you can assign an expression control to parameters as well. The pedal tries to simulate a BBD/Bucket Brigade effect analogue effect pedal, but using a DSP chip to get all the nuances and character associated with this old technology. The powerful DSP allows more control and a stereo effect with modes such as reverse delay, swell delay and reverb mode. So it goes far beyond the old BBD tech it is trying to recreate. You also get sound on sound looping with adjustable tail lengths.  You can either have the trails or set the effect to true bypass as well.

They have also added an auto oscillation function; all you have to do is hold down the tap temp switch down to trigger this effect. The official demo video below gives a good overview of some of the more subtle and outlandish sounds that can be achieved using the Avalanche Run. Preorders should have started shipping by now. However, the company state the pedal will be more widely available by June this year.